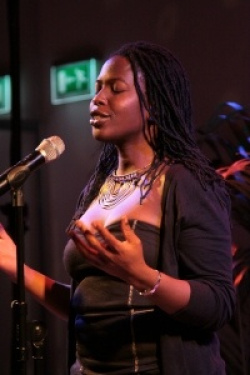 What happens when a perfectly responsible woman gives in to the pull of passion and adventure? That’s the subject of this one-woman show by Manchester poet/playwright/performance artist Chanje Kunda which premiered on Friday at Manchester’s Contact theatre.

Described as part autobiography, part travelogue, part lyrical drama, it is based on Kunda’s poetry collection Amsterdam, which she has presented in a variety of forms in the Netherlands and on her home turf.

A young mother is living an organised and “sensible” life with her young son when she has the chance to leave behind rainy Manchester and grasp at a romantic interlude with an attractive and exciting man from exotic Surinam, who she meets on a break in the Dutch city.

Despite her own doubts and fears and those of her “megaphone mum” - portrayed through the hilarious medium of a loud-hailer - she decides to go for it. Eventually she commits in a highly practical fashion, by getting an artist-in-residence position in Amsterdam and taking her boy with her. She’s no feckless parent, she plans carefully. But oh – she so much wants to relish the lust of the early days of the relationship, and dares to hope it will become something akin to love.

Kunda is a delightful tour guide on this journey. First appearing adorned with the paraphernalia of domestic drudgery – colander, tea tray and crockery – she starts her new life in a swirly black leather skirt which enables her to move easily about the simple but clever set, and portray many moods. By turns she shows nervousness, exuberance, dreaminess, hopefulness, sexual energy and anger with confident physicality.

She fizzes with anticipation and purrs in post-coital pleasure with her exquisitely plaited hair, glossy skin and beautifully expressive hands, and creates a living room, a bedroom and an aeroplane all from the ingenious set in which a wall turns into a table, a chair, a bed, windows and more.

Kunda’s poetry is gorgeous – richly textured, poignant, funny, gloriously descriptive, cleverly constructed, and all delivered in her beautiful, deep, fruity voice. She sounds like a Mancunian Mel B.