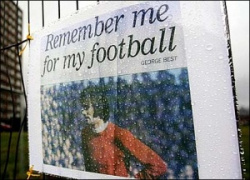 Not much rain that month they say - May of nineteen-forty-six;

the ache of war, still in the bones, where Cregagh boys kicked tries

down at Malone and dodged the sixes from the next-door cricket pitch.

but some alignment of the spheres, some sorcery, conspiracy of Gods,

some fate; a child was born, a boy, blue eyed, dark haired - different from the rest,

and soon this world would come to worship, to call him great, “the one”, the best.

A slight kid, “too small, too light” they said, to kick a ball for our Glentoran,

as they watched him claim the greens round Burren Way. But a Bishop’s wise eyes

watched, and saw the spark of a messiah,

a  message arrowed down the wires to rainy Manchester:

“I think I’ve found you a genius.”

Your fate was sealed that day.

At just fifteen uprooted from the green of Ireland - Busby’s newest babe.

In red they led you down the Warwick Road, where Munich’s ghosts

still strode and whispered in the stands. Perhaps they never knew back then,

of magic in your feet, the future held in those two hands. Two years you waited,

training every day, and scrubbed the muddy boots of legendary men; until at seventeen

your dream came true - named on the sheet,

a number on a shirt,

- they let you out

How did it feel, that walk out of the darkness, trembling in that deafening wall of sound?

A wide-eyed kid, still damp behind the ears, let loose to run with giants;

the chance to walk on hallowed ground? Did you see that day,

the world waiting at your feet? That every ragged kid on every street

would take your name? The shimmy through the papers, from the back page

to the front - a beautiful face

for the beautiful game. Did you start to feel that devil’s trident pricking at your heart,

the flashbulb lightning storm of words, the demons, slowly picking you apart?

Yet in those  golden scarlet years, there was no other God but you, no other game,

no other team. And from the Streford End the faithful sang your name,

while you played out

The clubs, the clothes, the cars, the girls, the champagne-comet trail you blazed.

While we just watched; glaze-eyed in the glory of of a supernova superstar.

Those were the days, your days, and ours.

Your face upon a million walls, while your feet danced through

defences like Irish mist, to tunes no one else could hear.

Each passing year we polish up the memories.

The big men cried the day they laid to your rest.

For their brilliant, blue-eyed Belfast boy,

What they said about him:

What he said about himself:

"I spent a lot of money on booze, birds and fast cars. The rest I just squandered."

When Michael Parkinson asked how soon before kick-off George had made love: "Half time!"

Anthony, I enjoyed this homage, written with passion, and the footnotes. You write in a variety of styles. Not everybody does that but I think it's good.

Football is amazing. At root, it is an immense waste of cerative energy - 22 men chasing a bloated baldder around a field and trying to slot it between two posts. But beneath the apparent banality of it all there is ... beauty, poetry, magic, athletic grace, tribalism, and, yes, passion. Keep writing. Be the best.