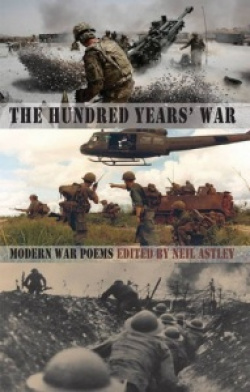 You could hear the guns firing on the western front back in England. I didn’t know that was also true in the second world war, but ‘that low pulsation in the east is war’, realised Denise Levertov, in ‘Listening to Distant Guns’, from her home county of Buckinghamshire in June 1940. It was her first published poem, written during or just before Dunkirk.

Immersion in this anthology brings home many truths about war, and certainly helps to remove any sense of distance from it. It commemorates the centenary of the outbreak of the 1914-18 war - but, as the title makes clear, its scope is far wider than that.

The Hundred Years’ War begins with the war that we associate with poets such as Owen, Sassoon, Thomas, Rosenberg and Gurney, and concludes with the conflicts and acts of terror around the world a century later. Bloodaxe and Neil Astley are known for producing anthologies that endure, and this one is also invaluable as a reference book, including short biographies of the poets and histories of each conflict.   Alongside ‘The Soldier’ by Rupert Brooke, Ivor Gurney’s ‘The Silent One’ and Sassoon’s ‘The Hero’, are translated poems by Alfred Lichtenstein (son of a Prussian-Jewish factory owner, who died of his wounds in September 1914); Wilhelm Klein, a German avant-garde poet and army field-surgeon during the war and French poet Albert-Paul Garnier, an airborne artillery observer whose body was never found after his plane was destroyed over Verdun in 1917. The first world war section, in chronological order, includes 10 poems by Sassoon and eight by Owen – poems that have portrayed a war so vividly to successive generations that some modern-day politicians, for their own reasons, seek in vain to decry them.

In a conflict widely seen as foreshadowing a wider European conflagration,  poets volunteered and died in the Spanish civil war – John Cornford and Charles Donnelly – in addition to Lorca’s death at the hands of Fascist partisans in 1936.  Bertolt Brecht, a fugitive from Germany, observed from Denmark in 1937: ‘When the leaders inveigh against war / The draft papers have already been printed.’ Louis MacNeice observed the felling of trees of Primrose Hill in London to clear the way for an anti-aircraft battery in the desperate, fevered ‘peace in our time’ atmosphere of 1938: ‘Save my skin and damn my conscience … Glory to God for Munich.’

More was to come than the felling of a few trees. In possibly the bleakest poem about barbarity to emerge from the second world war, Anthony Hecht’s ‘More Light! More Light!’   begins with the ordeal of a religious martyr burned at the stake in London, and ends with the savage deaths of two Jews and a Pole in a German wood at Buchenwald. Zbigniew Herbert’s ‘Buttons’ documents the Katyn massacres of Polish prisoners of war by Stalin’s soldiers. Jean Tardieu’s ‘Oradour’ and  Carole Satyamurti’s ‘Memorial’ testify to the murder of 640 French civilians by the SS in 1944.

Aleksandr Solzhenitsyn’s account of Russian soldiers on the rampage in East Prussia was written in his head while he was serving a sentence of forced labour after the war: ‘The little daughter’s on the mattress, / Dead. How many have been on it? / A platoon, a company perhaps? / A girl’s been turned into a woman, / A woman turned into a corpse.’ Jewish-Hungarian poet András Mezei’s ‘Christmas in Auschwitz’ poems  form  brief, spare vignettes of the unimaginable.

Hungarian poet Miklos Radnóti was shot dead on a forced march towards Germany. A notebook of poems telling the story of his last six months was found on his body when it was exhumed from a mass grave for reburial after the war. He wrote: ‘Is there a land still, tell me, where this verse form has meaning? / … I write this poem here, in the dark, just as I live / Half-blind, like a caterpillar inching my way across paper.’

At the end of the second world war, Nobuyuki Saga, writing of those vaporised in the atomic bomb at Hiroshima, said: ‘One man’s shadow among hundreds is branded on stone steps. / … Who will free this shadow from the stone?’ Sankicki Toge, who was in Hiroshima when the bomb dropped, worried about ‘The Shadow’, now a tourist destination, but at the same time ‘assaulted by the sun, attacked by the rain, covered over by dust, / growing fainter year by year.’

Brecht’s verdict was, ‘War has been bought into disrepute’: ‘I hear it is being said in respectable circles / That from a moral point of view the Second World War / Did not come up to the First …’ And there was the question of culpability. Austrian-born Erich Fried’s ‘Conversation with a Survivor’ examines the conscience of one who was afraid to take action against evil because of the fear of death: ‘Only one thing I know: Tomorrow none of us will stay alive if today we again do nothing.’

Robert Lowell based his poem ‘Women, Children, Babies, Cows, Cats’ on court-martial testimonies about the My Lai massacre in Vietnam by US soldiers: ‘We had these orders, / We had all night to think about … / we was to burn and kill, then there’d be nothing standing’. Ruth Awad, relating her father’s recollections of war-torn Lebanon: ‘They got so smart killing people – sending one bomb in, / waiting for the flood of help, then bombing again.’ Tony Harrison’s poem ‘A Cold Coming’ about the awful image of the charred Iraqi soldier from the turret of a burnt-out tank in the first Gulf war.

Conflicts surrounding Ireland are not forgotten in this anthology.  From WB Yeats’s poem ‘Reprisals’,  about atrocities committed by the Black and Tans, and Brendan Kennelly’s ‘Gravel’  about the actions of Irish Free State soldiers in the civil war, to the Northern Ireland Troubles that began again in the late 1960s with protests, and continued for decades with bombs. Ciaran Carson’s ‘Belfast Confetti’: ‘It was raining exclamation marks. / Nuts, bolts, nails car-keys / … Where am I coming from? Where am I going? A fusillade of question marks.’

Seamus Heaney, abhorring all violence, distanced some of his poetry with images and symbols, such as the mummified bodies in peat bogs in ‘The Tollund Man’. Dublin-born Paul Durcan, who mentioned Sinn Fein’s Gerry Adams in a poem about the murder of two RUC constables, subsequently received death threats. Amongst all this, it is easy to dismiss the Falklands war of 1982 as a bizarre footnote, remembered partly for its tabloid headlines. As Gavin Ewart put it: ‘At home, indeed, it was terribly like the World Cup , / … Was the General Belgrano really offside?’

In the wars in the former Yugoslavia, a litany of war crimes culminated in Srebenica, when over 8,000 men and boys were slaughtered while supposedly under the protection of Dutch UN peacekeepers.  Scottish poet Colin Mackay tells of finding a Bosnian woman he had befriended murdered, with her family and the rest of her village. He later took his own life. New war poets have emerged. Brian Turner and Kevin Powers, both former US soldiers in Iraq, have written about the children caught up in grisly violence, and of desensitised feelings: ‘Think almost reaching grief, but / not quite getting there.’ In Afghanistan, poems by Dan O’Brien, Andrew Motion and Owen Sheers are contrasted with the poetry of Taliban fighters, and landays, traditional folk couplets created by Pashtun women: ‘My Nabi was shot down by a drone. / May God destroy your songs, America, you murdered my own.’

There are also poems about September 11, the Bali bombings, refugees in Sudan, the uprisings in Libya, Egypt and Syria. The Hundred Years’ War is a hugely impressive endeavour. But the more you read it, the more the soul groans. Its weight of testimonies is the stuff of nightmares; it is almost too overwhelming to bear. Both poetry anthology and history book, it helps to increase understanding of the pattern of conflict in the second half of the 20th century and early years of the 21st, as well as engendering a sense of guilt and dismay. As Helen Dunmore says: ‘For God is counting / all of us who are silent / holding up our newspapers, hiding.’

However, the anthology seeks to end on a note of optimism, as it must, with two poems by Pakistan-born Imtiaz Dharker. One, ‘A Century Later’, concerns the brave and defiant Malala Yousafzai, who campaigned as a young girl for women’s right to education, and survived a Taliban attempt on her life: ‘Bullet, she says, you are stupid. / You have failed. You cannot kill a book / or the buzzing in it. / … Behind her, one by one, / the schoolgirls are standing up / to take their places on the front line.’ The other is about the killing of drummer Lee Rigby on a London street: ‘The city’s heart becomes a drum, / … It speaks the name you understand, / the difficult name, the name of peace.’

Rappers, slammers and laureates collide in lineup at Latitude ►