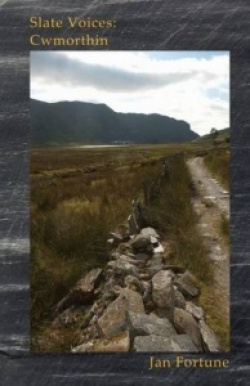 Landscape and memory, landscape and voices, landscape and ghosts. How inevitably connected is the human spirit to the places we inhabit or have inhabited, both in life and death.  This is the subject of a co-written collection from Jan Fortune and Mavis Gulliver, a written testament to the long forgotten communities of now disused slate quarries, the men who worked in them and the women and children with no choice but to follow. It is the story  of Cwmorthin in Tanygrisiau,  north Wales, and the islands of Netherlorn in the Firth of Lorn,  in Argyll and Bute, on Scotland’s west coast.

Jan Fortune has written the Welsh section, Cwmorthin, and Mavis Gulliver the Scottish section, Islands of Netherlorn.  The book is constructed so that each author’s section faces a different way and each has its own cover. Instead of a front and back cover, the book has two front covers; an interesting idea, although I did find that in the process of reviewing I was constantly turning the book round and round, which became irksome.

The two sections adhere to each other through the commonality of their subject matter; a joint heritage of the Celtic and Gaelic languages, and the landscapes of stone and slate, which of course have their own voice, as well as shoring up the echoes of voices of the vanished folk who once lived and worked in these forlorn places.

Slate extraction from Cwmorthin began around the start of the l9th century. Working conditions were so poor it was known locally as ‘The Slaughterhouse’: “splitting rocks that hold the mountains overhead, till beveled columns sag; bring the darkness down”.

A working quarry is an aggressive thing.  An abandoned one is a well of emptiness.   Likewise ruined cottages,

Ruins cannot recall who lived in this house …

I am certain that they did. It is not part of the poet’s job to be architectural historian or sociologist or anthropologist, or any other “ologist”. It is only necessary for a poet to be a poet. Yet it is impossible to write with erudition about any lost society without, to some extent, adopting those other roles. It is apparent that much research has gone into the work, but what struck me most about the book was its sense of empathy with the struggle of the lost souls and the intensity with which the two poets have listened for the echoes of this lost world.

The Cwmorthin poems tell of a dark and secret place, of difficult access.  A visitor writes in 1781: “The road was steep/The valley narrow, ascent was hazardous.” And in the poem entitled ‘The Underground Men, 1936’, which describes an old photograph, I particularly liked these lines:

They stand or sit on slate, rockmen, miners, labourers …

Their names people this valley still.

The work has long since gone.

Throughout this work there is a sense of the silence and emptiness of abandoned places.  Of time not so much passing as having stopped altogether. For example,

The second part of the book written by Mavis Gulliver deals with an area known as Slate Islands.  Wikipedia informs me that Seil (Scottish Gaelic: Saoil) is a small island on the east side of the Firth of Lorn, seven miles south-west of Oban.  I feel the book could have benefited from a short introduction detailing the whereabouts of the two localities for those who do not know. But to the poems.

Even on a sun silvered day

When this waste of slate

Is dotted with heather

And cliffs are green with ivy

There is melancholy here.

The section entitled Belnahua gives a good account of the life of poverty and hardship amid this lonely waste: “Twenty seven acres set in sea – no water source … Owners came for gain. Nothing else would bring them to this place.”  (‘Belnahua, 57’), and “no doctor, nurse or midwife; no Church,  no Minister or burial place”. When life had ended the body had to be rowed back to the next island  “‘up Luing’s coffin road”.

In this section there is a fascinating poem, ‘Belnahua Beckons’, which tells how the poet managed eventually to visit the abandoned shores of the island despite reluctance on the part of local boatmen to engage with the tides and deep landing.  When she arrived she found:

lichens; moss; but mostly there is grass

There is an aura of melancholy through both sections of the book, as there must be, for the sense of a lost heritage is a melancholy thing. Yet mineral extraction is and was bought at enormous human cost. Rather than mourn the passing of these communities, the authors celebrate the human spirit that enabled them to survive as long as they did, and remind us that the biblical injunction to rest on the seventh day didn’t apply here.

On the seventh – no hope of rest –

When tides were right they clambered into boats.

Mavis Gulliver has dedicated her section of the book to the “memory of the women and the children who died before their time”. These poems are a worthy epitaph.

◄ Soaking up the words: last chance to have your poem on beermat