Shooting from the hip: Dharker, Gross and Mort are quick on the draw at the Troubadour 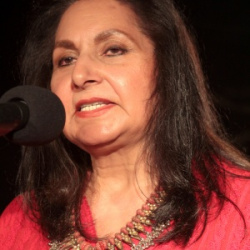 Three leading poets at the top of their games amused, surprised and entertained an audience at the Troubadour in London last night as they delivered a succession of snippets of their poetry in an improvisation entitled, ‘What We Should Have Said’.

Imtiaz Dharker, pictured, Philip Gross, and Helen Mort passed on the poetic baton from one to another, to give a series of vignettes that took us from a cafe in Bombay, to Barry Island, and on to Oldham, although not necessarily in that order, and included other subjects like language and life and death along the way.

Dharker, who describes herself as a Scottish Muslim Calvinist, and who now lives between India, London, and Wales, nevertheless spoke of someone “wanting to declare, like Freddie Mercury, that you’re from somewhere, like Zanzibar”. In her cafe in Bombay, “knee locked on knee … until the day slipped off the map, into the Arabian Sea”.

Gross, who was clearly enjoying himself, celebrated the smell of burgers and beach tar at Barry, and coming home “with a neon-green flubbery monkey”. Mort, recalling ‘Oldham’s Burning Sands’, said: “Sundays were Last Train to Dobcross … long guitar solos that sounded / like a cardigan unravelling in Saddleworth”.

Dharker said of someone who taught her a few choice phrases: “I fell for you, arse over tits … I tell you, since you went, it’s a pain in the arse.” Gross observed the celebration of a goal, “without words in any language”. Mort spoke of Miss Heath, a dance mistress who “ at seventy … could still perform / a perfect pas de chat. / Her French was wasted in the north.”

And life and death? Dharker’s view: “There is nothing but a swing door between living and dying … you set the door swinging so hard, I don’t know where I’m coming or going.” And Mort wondered: “Who’d jog along the Coffin Path?  Most evenings only me, hurrying between the huddled trees”.

The ‘What We Should Have Said’ spoken word and music format was created by writer-performer-producer Stuart Silver, who added his own commentaries and humour in between the poetry at the Troudbadour, such as: “If the government issued us all with a lucky stone, morale would increase … this country would get back on its feet. But where would you find so many lucky stones? Probably abroad.” The words were interspersed with music from Marios Takoushis on the piano: often cool and unobstrusive, but always alert and sometimes eerie.

I hadn’t seen this format before. The poets’ performances were seamless, and made me think they must have rehearsed, at least once. But, remarkably, no.

Earlier, in the first half of another packed evening, there were four other poets: John Harvey, Christina Newton, Jenny Lewis, and Alison Hill.

Harvey, a crime writer, read poems about Chet Baker, Wild Bill Hickok and WB Yeats, and of a friend in a hospice gathering his energies to correct a bedside reference to Brubeck, Mulligan and Getz. Newton, passionate and dramatic, provided poems featuring the rain, the dangers of kissing publicly in Burma, and about miners trapped underground in Chile. Lewis read from her collection, Taking Mesopotamia, on the first world war trail of her father, who died when she was a few months old. Hill’s poems from her new collection, Slate Rising, included ‘Red Feathers’, reflecting her parents’ pooled memories of the 1950s.

So many poets! They crammed the stage for the team picture at the end of this different kind of event, that revealed sharp-witted writers; quick on the draw; on their toes.