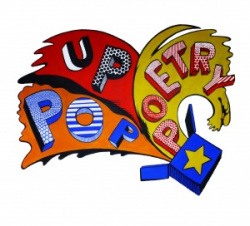 June's Pop Up at the Bar des Arts was a great success despite a few glitches - what with glorious weather, Mexico playing Brazil in the World Cup (a lousy draw), our back-cloth screen collapsing and almost braining Dónall, our mic-stand proving short of a rod or two and our stage lighting staying obstinately unlighted. Luckily, all these material disasters happened before the start of the evening. But our host was suffering from some lurgi that kept him a bit quieter than usual and the evening started and finished half an hour later than usual. The omens were not good.

BUT!!! Our audience was small but high quality, our featured guests were many and equally high quality. Sue Guiney's talk and reading was delightful as she spoke about her friends and work in Cambodia; Patrick Osada charmed us all with his beautiful poems about rural England. Steve Pottinger ranted with his usual gentle vehemence and Gary Hartley convinced us of the positive value of negativity (coming from Leeds may help, he suggested) and had us laughing late into the night - he'll do well in Edinburgh next month, we predict.

At the open mic (which no-one used in the absence of the mic stand) we heard and enjoyed Kyle McHale's moving poems, especially his tribute to his father and Arlington. Thomas Thurman read a selection of his poems after Frances Cornford and John Betjeman among others and Andy Frost read his lovely pieces about kite-flying. Holly Luhning read her moving found poems about 17th and 18th century medicine; Karen Izod's first appearance at Pop Up gave us her thought-provoking meditations on modern war. Mary Pargeter's touching poems were about her brother's sudden death and Richard Alleyn's poems again touched on the theme of war. Janis Haves finished the evening by reading her new poem (her first new composition for two years, she said) and had us all laughing again. I hope I haven't missed anyone out. It was a night to remember for several reasons, but mainly for good vibes and good poems.