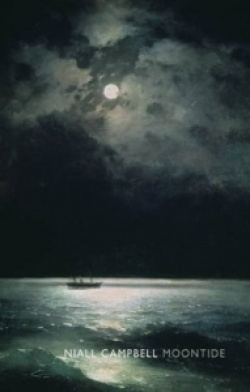 Prompted by the news that Moontide had been shortlisted for best first collection in the Forward prize, and spurred on by the furore surrounding Jeremy Paxman’s remarks, I finally took the book out of my bag, where it had been getting progressively more dog-eared for several weeks.  Aside from a lack of time, the main sticking point had been the book’s cover: an unappealingly dark oil painting of a sea at night. Perhaps there was more to this volume than met the eye.

Niall Campbell, (b.1984), as the back cover says, grew up in the Outer Hebrides. The prominent positioning of this information indicates how central it is to the book. Campbell later went on to study English at Glasgow and creative writing at St Andrews, and this distancing from his home is what gives this admirable collection its tone: steeped in the natural world of the Hebrides, many of the poems foreground a sense of departure and loss. Campbell won an Eric Gregory award in 2011 and the Poetry London competition in 2013 for a poem in this collection, ‘ “The Letter Always Arrives at its Destination’ ’’. His pamphlet After the Creel Fleet was published by Happenstance in 2012. As well as being shortlisted for the Forward prize, Moontide is a Poetry Book Society recommendation.

Once I started reading Moontide it was not a quick process. These concise, neat boxes of common words that appear so easily decoded cannot be taken at face value; once unpacked, they contain worlds that the reader can recognise and step into. In that, they resemble the poems in Rachael Boast’s Pilgrim Flower, along with a similar adherence to the tradition of lyric poetry. In ‘Concerning Song/Silence’ Campbell is writing – as he does repeatedly throughout this book – about poetry itself, about writing, and reading. He employs the image of a bird - another common trope in this collection - to represent meaning, trapped among the printed letters on the page, ‘the inked gorse’:

it was simple: an ink house, an ink

tree, blown to leaf, and the strange bird,

joy, shivering in the inked gorse.

These are metaphorical poems employing physical objects to convey their meaning: the abandoned house where the ice weeps (‘Return, Isle of Eriskay’); the nightjar which from its lowly position can see the dirt and the stars, and how life is chance (‘The Tear in the Sack’). William Carlos Williams’ red wheelbarrow would not be out of place here, nor his “no ideas but in things”.

Rooted in the physical geography of the Western Isles - the “ram’s wool flagged on a neighbour’s fence”, the sea with its “sunk rope and its salt bed” - these poems transcend the poet’s personal grab-bag of imagery (dark and light, the sea, birds) to tell a greater truth. One of Campbell’s skills is to employ complex metaphors of concrete objects and landscapes which are turned upside down or inside out to reveal something more. The beautifully intricate imagery of bath/boat/ocean in ‘North Atlantic Drift’ unwinds gently to reveal a bigger question:

or long remembered – the shirts

receding in the corner shadows

dropped as weights, or anchorage.

Campbell’s upbringing and subsequent departure informs more than just his imagery: many of these poems are about leaving, loss, the impossibility of return. Thus, in ‘Window, Honley’, the poet says:

Just light, less light, and dark; the going off

Of milk or love; our tides claimed back

ending the poem with the image of “a man with a pen / at a lit window, that he’s long since left.” There is an undercurrent of darkness in some of this work: the “long, black mouth” of the resurrected dog in ‘The Fraud’, the drowned who climb ashore in ‘The House by the Sea, Eriskay’ and “stand open mouthed at a fire, / drying out their lungs, that hang in their chests / like sacks of black wine.’

Several of the poems in Moontide strive after the ineffability of life, how to live it, and specifically how a poet can capture life in their work. The poet is an outsider, an observer who stands far enough away to see the beauty even in suffering. A late poem, ‘Kid’, captures the contradictions of life and art, how art stands outside the busy world, representing “the true time, when little matters” and how “sometimes, the song carries”. ‘The Work’, a Guardian Poem of the Week earlier this year, lists different ways of writing poetry, all involving the poem existing as an entity to be discovered by the poet, rather than created.

The red wheelbarrow is not the only thing Campbell has taken from his forebears: this is a poet who does not reject those who have gone before him but weaves their techniques into his own line. Many of the poems refer directly to other poets and artists, from Apollinaire to Seneca and Dostoevsky, while others play with rewriting: ‘Walking Song’ is a riff on Frost’s ‘The Road Not Taken’ and ‘A Seal-skin Tale’ even has the subtitle ‘My version’. These are composed poems which pay close attention to the patterning of words within them and give the sense that the poet has fine-tuned them carefully. The use of short lines, and few of them, means that the sustained use of rhythm and alliteration is magnified. Campbell does not use traditional forms but the vast majority of these poems are divided into two or three stanzas of regular lengths. He has a particular gift for the line-break, sparking to the next line, which might be why the prose poem, ‘An Introduction to the Gods of Scotland’, is disappointing.

In a case of not judging a book by its cover, this turned out to be a fine collection, one which both needs and deserves the careful reading that reviewing requires. The final poem in the book, ‘Leave, Eriskay’, gives the tantalising sense that Campbell is moving on to different poetic pastures, something to be watched with interest, and is short enough to quote in full:

I know the feeling of the grain farmer

Who packed up and left his smallholding:

And not for the famine or the drought

But the light being always on his back.

◄ A sonnet, a sestina, plus four poppadoms: poetry and curry at Bradford festival

Thanks for a great review Cato. I must say I find the cover rather intriguing and quite Hebridean. Perhaps it is a bit dark tho. Thanks again.