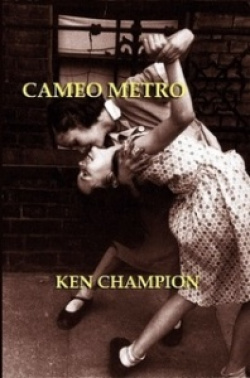 I picked up Ken Champion’s second collection, Cameo Metro, with anticipation. His first, but black & white is better, has a 1960s-style cover, and a sharp, laconic style that I’d guess owes nothing to creative writing classes, and everything to life experiences. The exuberant cover of the new book harks further back, to the 50s and 40s.

Champion is at his best among London haunts, admiring architecture, or recalling the currency of his family’s past, counting his dad’s change in ‘Old Money’:  “the tuppences, two bobs / it’s their clink, their light ales, ten Woodbines”.  There is the same eye for detail in ‘Aunt Rose’s Funeral’: “the Benfleet bungalow, the pampas / grass she would pick to spray with lacquer / for the vase”.

In ‘Retro’ it’s as if you’re watching a film, as Champion gives us a wartime glimpse of his Aunt Lil:  “slabbed eels twitching outside, pill box hat for / The Harold on Sunday, turban in the tractor / factory making shells, painted line down / the calf for the Rex.”

This cinematic quality is not surprising. The poet reveals his love of darkened afternoons at the pictures and his eye for technical detail  -  “the static shot, full face / looking sad as she drives along a road, / not even the upward, arcing angle of tree tops / to lessen the intensity” - in ‘Afternoon Movie’. There’s more amused and tender observation in ‘Usherettes’:  “They’ve heard the roar of light hit the screen, ping of a bra / strap from the back row, watched a lit match passed like / an Olympic flame across red velour seats”.

Champion has a section in this volume, as he had in his first collection, which includes his enduring, if at times self-mocking, admiration for African women. “She dresses swiftly, / her Nefertiti head upright and still, / and with a flat-vowelled finality / suggests I write a poem about it.” (‘Girl, African’). It’s an honest self-portrait that nevertheless leaves this reader feeling a tad uneasy, and a bit like a voyeur.

There also appears a certain arbitrary casualness about line breaks at times. Many more poems have been bundled into this volume than were featured in the first, and it’s hard not to feel that a certain dilution has taken place, even if you’re getting a lot more for your money. Yet there’s a story in every one of the poems.

His preoccupations, with architecture, the past, and its movie possibilities - “The ward was once a billet for men at the aerodrome / its Art Deco tower guiding aircraft into a black and white film”  – are worked into a moving poem about his dying father, and their relationship, a father who “had carried me on mean shoulders, calling me son, but never / my name, had played keeper for his regiment, hid behind trees / at the back of the school shouting, dive at their feet!”. (‘The Last Stroke’).

Champion’s poems don’t require you to worry away at their meaning. His materials are London streets, afternoon cinemas, fine old buildings, and a vanishing or already demolished way of life, portrayed with warmth as well as detachment.

◄ Write Out Loud Wigan: warm, irreverent, rude, and the odd hiccup, too