Competition closes in 23 days, 13 hours. Get details and Enter.

Older and young poets sum up the spirit of Wenlock 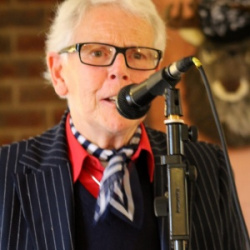 Two readings by young and older poets left a deep impression of the vigorous health of poetry on the final day of Wenlock poetry festival on Sunday.  The older poets were represented by five women - RV (Rosie) Bailey, pictured, Jean Atkin, June Hall, Lesley Ingram, and Hermione Sandall – reading from the Grey Hen Press anthology, Running Before the Wind, which is edited by the press’s founder, Joy Howard, and is made up of poems about the sea. They delighted a packed audience at Wenlock Pottery, particularly when RV Bailey transformed her vowels into snatches of Geordie during her poem about her home town of Whitley Bay: “Gran’s with the chapel trip / She’ll not come next year. It’s nippy / Watching the canny bairns”. I trust that Grey Hen Press will be coming again to Wenlock in some guise next year. The anthology is packed with highly regarded and familiar names from the poetry world, including Ann Alexander, Penelope Shuttle, Marianne Burton, Vona Groarke, Caroline Carver, Maggie Butt, Alison Brackenbury,  Jo Haslam, Anne-Marie Fyfe, Char March, Ruth O’Callaghan, Carole Bromley, Geraldine Green, Pat Borthwick, Wendy Klein, and many, many others. As Gillian Clarke is quoted as saying of the anthology: “A wind-shaken, salt-laden, heartload of poems by women, and not a dead fish among them.”

They were followed in the afternoon at the Methodist church in Wenlock by four successful Foyle Young Poets who are already moving on to greater things. They were introduced by one of last year’s judges, Professor David Morley, who praised their “commitment, passion and craft”, and described the Foyle award, for those aged 11-17, as like a “shadow education system”. Each year 100 winners (85 commendations and 15 overall winners) are selected, in one of the world’s biggest poetry competitions. Colette Sensier, Jay Bernard, Richard Osmond, and Flora de Falbe all referred to the difference the Foyle award had made to their lives, as they took on subjects ranging from laser eye surgery, drug smuggling via Bedouin camels, joy at the break-up of unhappily married parents, elements of gothic horror; and, within the church, challenged the myths and legends of religion itself.

Follow that … well, three poets featured in the excellent anthology Maps & Legends: Poems to Find Your Way, celebrating five years of Midlands publisher Nine Arches Press, had the task, in the next event at the Methodist church. Maria Taylor, Mario Petrucci, and Matt Merritt read and were then interviewed by one of the anthology’s editors, Jo Bell, in rapid Q&A sessions. Bell’s interviews elicited the fascinating response from Mario Petrucci, for instance, that 39 poems from his collection, anima, were part of a much longer sequence of 1,111 poems. Conceding that this might be the longest sequence in English poetry, in which he had written almost one poem a day over three years, Petrucci surprised his listeners by revealing that these poems, written without punctuation and presenting layout challenges, could not be tampered with in any way. “Not a word’s been touched. I can’t edit these poems. You can’t edit a breath. The line happens, it’s gone. You can’t go back to it. Not because of ego, but because of an absence of it. “ He described his editor Jane Commane as “the most patient woman on the planet”. The event was introduced by Simon Thirsk, chairman of Bloodaxe, who praised Commane's achievement, as well as noting the potential for Nine Arches to grow further. He added that five years was an important milestone, and paid tribute to its getting there: "Lots of presses come and go."

Sunday morning had begun at Wenlock Pottery with a reading from the Offa’s Press anthology, The Poetry of Shropshire, by editors Simon Fletcher and Jeff Phelps. In an unguarded moment before the reading Fletcher had apparently anticipated an audience of “maybe only half-a dozen”. He had certainly underestimated the love and passion of his listeners in the crowded pottery for “deep, old Shropshire”, this fabulous county that still has the air of a well-kept secret. The anthology includes, of course, poems by famous sons AE Housman and Wilfred Owen, although Fletcher acknowledged that Owen only wrote a couple of poems “that even mentioned Shropshire”. If he had survived the first world war …?  This issue is partly addressed in the anthology in Jane Seabourne’s ‘In January, 1917’, a response to Owen’s letters from the often flooded-trenches: “More than standing on Haughmond Hill, / breathing in good Shropshire air, / he wanted dry feet: he needed new socks.”  There are poems about the Stiperstones and Wenlock Edge, Brown Clee and Titterstone’s radar,  the view of Ludlow castle, and the bridge at Shrewsbury, as well as the quirky ‘Calling On Ivy’, by Marion Cockin, that vainly pursues a flitter around the environs of Telford, including Lilleshall, Donnington, and Muxton. Nowhere quite suits Ivy. I find that quite hard to believe.

The Poetry of Shropshire event was introduced, like so many others at the festival, by poet, writer and festival chair Liz Roberts, whose enthusiasm, knowledge and humour very much summed up the spirit of Wenlock throughout the weekend. At the launch on Friday night she paid tribute to the hard work for the last two years of festival producer Antonia Beck, who is making way for Lisa Blower next year. Judging from a quick conversation I had with Lisa on Saturday morning, the spirit of Wenlock is likely to continue and thrive.

See pictures from the festival

Motion, Feinstein, and Williams at festival beside the seaside ►

Sounds like it was a great festival Greg. Thanks for such a comprehensive report.

They do, indeed, David. Much Wenlock is a delightful place, and you and I stayed at nearby Ironbridge, overlooking the Severn, which is a World Heritage Site. I have a marvellous picture of you enjoying a Guinness at the George and Dragon in Much Wenlock, during the lunchtime Poems and Pints conducted by Mark Niel on Saturday. Happy days!

And town and surrounding countryside add yet more value