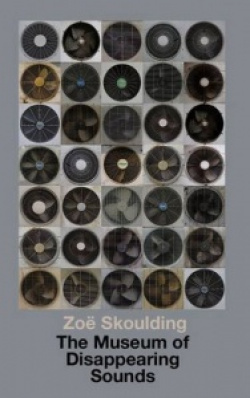 Writing on her staff profile page for Bangor University, where she is senior lecturer in the school of English, Zoë Skoulding says: “I perform poetry with field recordings and electronic music as an exploration of relationships between language and the physical environment.” This cross-art nature of her work is the clear driving force in this intriguing and highly-disciplined collection, shortlisted for the 2013 Ted Hughes award for new work in poetry.

To expand further on Skoulding’s remit: the poems here deal with sounds that are all around us, but that don’t necessarily reach our ears. The poems attempt to capture the sounds of enclosed spaces, extended open spaces, environmental sounds, voice characteristics and the vibrations of responsive surfaces. They are not concerned with delivering point-blank, bull’s eye statements, but each operates instead as a kind of investigatory net that is cast over a location. The mesh of sound connections that is drawn in as a result is what is on offer. The resultant work is a “synchronicity” of times and places rather than a “causality”; a promotion of a process over product.

The collection is divided into several smaller clusters of poems. The opening suite of five poems is a response to the question posed by Canadian writer and musician R Murray Schafer, “Where are the museums for disappearing sounds?”, and each one of these “exhibits” reads as a sound installation, full of the “crackle of static”, “the wind on the microphone” and rhythm that “turns to pitch and sinks to drone”.

‘Inventory’ is a mini-collection of eight poems that examines with a forensic eye the forms and functions of everyday objects, including a colander, a Singer sewing machine and a casserole dish. My favourite of these is ‘television’, which ends with the lines:

are humming quietly in

skies that haven’t reached us yet

Equally impressive is the suite of three poems set under the title ‘In Search of Lost Time’, which, Skoulding tells us in her notes, makes use of search engine results for Proust’s title. Here, Skoulding investigates how broken software, unreliable data, jet-lag and migraines cause us to maintain an uncertain, bewildering relationship to the actual passage of time. The sequence ends beautifully with the lines: “Between accident and absence / the world had changed into something unrecognisable.”

There is a suite of three poems written from the point of view of a narrator and his/her interaction with the voices/ghosts of three French poets. On a trip down into the Parisian sewers, Baudelaire turns to the narrator and says: “I’m so / tired of embracing clouds.” Paul Valéry, encountered in “the cemetery by the sea”, beseeches the narrator: “Don’t you / realise how beautiful silence can be.” Rimbaud is met out at sea as a “drowned man insisting je est je est je est.”

The collection concludes with the its main suite of poems, entitled ‘The Rooms’ (the word ‘stanza’ derives from the Italian word for ‘room’). This suite of 14 poems could be renamed ‘Fourteen Ways of Looking at a Room’, for the similarity to Wallace Stevens’ poem is striking. But instead of a blackbird, the focus of Skoulding’s suite is once again sound itself. In the first, ‘Room 321’, the narrator says: “It’s here that everything / is happening twice / once in the body / and once in the words for it.” In the second, ‘Room 201’, this idea is developed: “When entering the room he’s listening for / the two silences/the one inside and/the one outside the window.”

In her notes, Skoulding acknowledges the influence of American composer Alvin Lucier’s work on ‘The Rooms’. Lucier’s most famous work is ‘I am sitting in a room’, a sound piece in which Lucier recorded himself in a room saying “I am sitting in a room”, then playing back the line into the now empty room and recording that, then playing back that line into the room and recording that, and so on. Gradually, the original speech fades and merges with the resonant frequencies of the room itself, which eventually take over. Lucier’s piece demonstrates that the listener is no longer merely the passive recipient of meaning, but rather the place in which meaning is created, and this is Skoulding’s modus operandi too.

In between these suites, there are single poems of great beauty, which also explore the soundscapes of single locations. These resemble the work of another sound artist, Luc Ferrari, who made field recordings of places and then edited them down into highly compressed, narrative-driven sound pieces. ‘Gwydyr Forest’ and ‘Easy Listening (Penmon, Anglesey)’ are poems that investigate the “lattices of molecules” and “skin and blood vessels” and posit such phenomena as “the surface as / écoute.”

All these poems share a spectral, haunting beauty. They are fine spun and well balanced, but material and granular too. They seem fragile at first, but repeated readings reveal their tensile strength; pull a poem in one direction and the poem bends, but doesn’t break. While reading them, the poems reminded me of many other things: the black glassiness of obsidian, the intricacy of filigree, the ghostliness of X-rays, the blasted music of Thomas Köner and Mika Vainio. Skoulding is one of the most adventurous, elegant and controlled poets working today and her collection is a tremendous achievement.

Richard Skinner has published three novels with Faber & Faber. His poems have been published in Amaryllis, Brand, HARK and Magma and have been shortlisted for the Charles Causley competition and the Wenlock poetry festival competition, and longlisted for the 2013 National Poetry
Competition. His poetry collection, 'the light user scheme', is published by Smokestack