How am I going to Explain This? 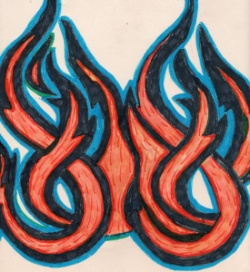 I killed a man. It was self defense. But God forgive me I killed him.

I told him, "Don't mess with me. You'll regret it." But he didn't listen. The next second he was writhing in pain. I could tell his knees wanted to buckle, but they held firm.

When I released him I said, "Walk out that door and don't mess with anyone ever." He turned as if to leave but lunged at me.  The knife in his hand would have plunged deep into my heart. Except that he burst into flames. He touched my arm burning it. Then he was nothing but ashes.

I looked at my arm. I thought, 'Now how am I going to explain this?'