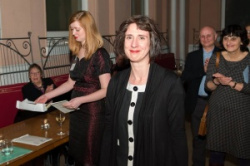 Sinéad Morrissey has been named winner of the TS Eliot Prize for the best collection of poetry published in 2013. The award, by judges Ian Duhig, Imtiaz Dharker, and Vicki Feaver, came at a reception at the Wallace Collection in London on 13 January, 2014. Duhig said the judges had been unanimous in their choice of winner. "Politically, historically and personally ambitious, expressed in beautifully turned language, her book is as many-angled and any-angled as its title suggests," he said. Morrissey, Belfast’s inaugural poet laureate, had read with nine other shortlisted poets – Daljit Nagra, Moniza Alvi, Maurice Riordan, (Ruth Padel), on behalf of Anne Carson, Michael Symmons Roberts, Dannie Abse, Helen Mort, George Szirtes, and Robin Robertson at the Royal Festival Hall the night before.

Among the poems she read was ‘A Matter of Life and Death’, which was inspired by the film, which she saw while going into labour with her first child. The film’s theme was paralleled by her own experience of her grandmother dying just before her baby was born.  Morrissey’s collection Parallax, which was also shortlisted for the Forward prize, is published by Carcanet. In an interview with the Guardian she said the collection was strongly inlfuenced by film and photography, and  "this idea of looking at things from different perspectives, shifting positions".

Sinéad Morrissey was born in 1972 and grew up in Belfast. She read English and German at Trinity College, Dublin, from which she took her PhD in 2003. She has lived in Germany, Japan and New Zealand and now lectures in creative writing at the Seamus Heaney Centre for Poetry, Queen’s University, Belfast.

The blog in your link is both interesting and depressing. Interesting in particular is your word 'shared' Greg. Its use seems to hint at a divvying-up of the awards among an elite group, consciously or otherwise. A pulling up of the ladder by those who scrambled through?

The blog shows an audit of competitions over several years, wondering if judges have had a propensity to choose winners from their own publisher, and at a poor showing in terms of ethnic and gender representation. If there were backscratching, consciously or otherwise, it would be a depressing reinforcing of a perceived divide between the poetry haves and have-nots: those who can get into the publishing 'game' and those who cannot.

If accurate, it is a reminder of the late Adrian Mitchell’s suggestion that ‘most people ignore most poetry because most poetry ignores most people’. To those in poetry publishing, too, it can seem their world is ignored by the open-mic poetry movement.

Of course this is but one of the reasons for the success of the whole open-mic poetry phenomenon wherein anyone can put a foot in the door of enjoying poetry without fear of rejection, of being winners or losers (slam poetry apart).

The live poetry scene is testament to the truth that poetry is about more than published work and poetry competitions. However, that should not mean, as it seems to for some, a rejection of published poetry (even though it can seem to be based on a rejection culture).

In conversations at open-mic events over the past 12 years I have wanted to urge writer-readers to buy and read more ‘published’ poetry. I believe that oral poetry benefits from knowledge of how poetry works on the page; and vice-versa. Poetry on the page can provide inspiration for our own writing; those ‘killer’ lines in particular, the ones that give us that frisson that takes us to the place where true poetry resides, whether it’s Blake’s ‘to see a world in a grain of sand’ or Gray’s ‘some mute inglorious Milton here may rest, some desert flower born to blush unseen and waste its sweetness on the desert air. Two of my favourites. Mind you, I am still drawn to such a killer line I heard in a live poetry set by manchester’s Alabaster de Plume: ‘Don’t ask me what the time is, the time is now’.

At our next Marsden Write Out Loud night we are bringing along our own favourite lines of poetry to share, which should yield lively debate, as it did when we had such a topic on the website discussion pages a little while ago.

Interesting blog here about the way the big poetry prizes are shared out http://displacement-poetry.blogspot.co.uk/2014/01/poetry-prizes-elephant-on-stage.html?m=1