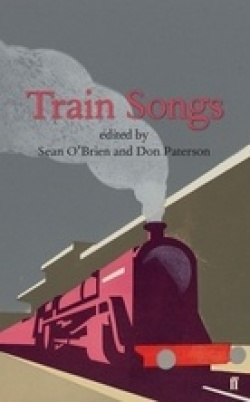 Maybe I should put my trainspotter’s notebook aside as I clamber aboard to review the Faber anthology, Train Songs, edited by Sean O’Brien and Don Paterson. Am I justified in wondering about the number of poems about American railroads in this collection? And that maybe there are rather too many that are only obliquely about trains?  And why should I surprised that the anthology includes song lyrics as well?

This book takes you beyond the Britain of steam engines and Beeching cuts. As the editors say in their introduction: “It would not be difficult to assemble a railway anthology along what seem like familiar lines, stoked by nostalgia and comfortably uncoupled from the insistent realities of politics, economics and war. This is not what we wanted to do.”

Accordingly, Wilfred Owen’s ominous ‘The Send-Off’ is included, along with Dan Pagis’s terrifyingly brief ‘Written in Pencil in the Sealed Freight Car’. This poem is all of three lines, and is cut off in the middle of a sentence. There are also Robert Johnson’s ‘Love in Vain Blues’, and ‘Train Song’, by Tom Waits.

Stephen Spender’s ‘The Express’ captures the golden age of British steam engines, reference to which makes men of a certain age go misty-eyed:

It is now she begins to sing – at first quite low

Then loud, and at last with a jazzy madness –

The song of her whistle screaming at curves

But trains do more than revive nostalgia or assist escapes; they can take you in directions that you do not want to go. Owen’s ‘The Send-Off’ describes soldiers heading for the first world war: “Down the close, darkening lanes they sang their way / To the siding-shed / And lined the train with faces grimly gay.” Matthew Sweeney’s traveller taking a ‘Tube Ride to Martha’, is trapped in the King’s Cross Underground fire, in which 31 people died in 1987:  “As the smoke got thicker and blacker / with flames growing fast, he realised / it was over, almost before it had begun.” This is Dan Pagis’s  horrific ‘Written in Pencil in the Sealed Freight Car’ in full, a tiny, snatched poem of history, race, madness, and Holocaust:

Here, in this carload, I, Eve, with my son

Abel. If you see my older boy,

Cain, the son of Adam, tell him that I

In contrast, the song lyrics of gravelly Tom Waits – “Well, I broke down in East St Louis / on the Kansas City line / … It was a train that took me away from here / but a train can’t bring me home” - are intermingled in this anthology with the gentle wit of Flanders and Swann mourning the beautiful station names lost in the Beeching branch lines closures in the 1960s, even if Mortehoe is spelt wrongly in the book, and St Erth and St Ives in Cornwall, miraculously, in the end escaped the chop: “On the main line and the goods siding, / The grass grows high / … No one departs, no one arrives / … They all passed out of our lives.” The lyrics of their song ‘The Slow Train’, cited by Tony Benn as one of his favourite poems at the Ledbury festival earlier this year, acknowledge the fact that something subtly changed in the character of Britain when Beeching wielded his axe.

For me, the most evocative poem about railways – although it is another that recounts a kind of leisurely travel no longer seen in this country - is Philip Larkin’s ‘The Whitsun Weddings’:

That Whitsun, I was late getting away:

One-twenty on the sunlit Saturday

Did my three-quarters-empty train pull out,

All windows down, all cushions hot, all sense

Of being in a hurry gone.

Yet ‘Train Songs’ takes you far beyond blue, remembered, branch-line Britain, to the plains of America, the creeks and paddocks of Australia, the horrors of Hitler’s Europe. After reading this comprehensive and clear-eyed anthology, you’ll feel you have gone on many tracks less travelled, and journeyed thousands of miles.

Greg Freeman will be taking part in an evening of railway poetry readings at the Jubilee Refreshment Rooms at Sowerby Bridge railway station on Thursday 12 December, as part of Sowerby Bridge arts festival

'Hunchback in the Park' competition reaches out to trauma victims ►