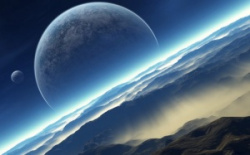 Spaced Out
At Jack Ass Flats in the desert strange things happen. Chav Tat Bitch tests his nuclear thermal rocket engines and dreams of trips to Mars. Mule Bitch roams the desert with his malformed cock in his hand. His bell end glows bright green. Tat Bitch is to blame.

Meanwhile, the psychotic man with the inverted nipples dreams of murdering his male rivals. In his mind he's killed, raped and ate the bodies of Tat Bitch, the bro' in-law and others a thousand times. Some believe inverted nipples cause his malady. Or is it a missing foreskin? Stolen by aliens. He befriends Tat Bitch's make believe women. Maybe it's sexual.

Mule Bitch gets it on with hookers who are really cacti with multiple holes in them. That's our secret, shhh! Don't tell him. Tat Bitch floats frighteningly freely in his nuclear fission thermal rocket engine exhaust. His bolts in his neck glow orange and his nervous twitch increases a hundred fold. Body popping radiation!

Soon he'll take the freak with the green bell end and the weirdo with inverted nips to Mars in his small spacecraft to see Gonk. Gonk is small, a soldier and unstable. And loves guns. Space cadet time! Cabin fever will ensue. Sexual events in space.