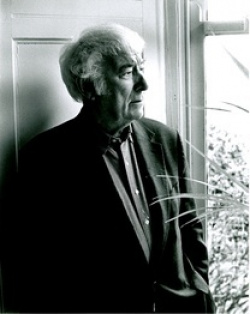 The funeral of the Nobel-prize winning Irish poet, Seamus Heaney, who died in Dublin aged 74 last Friday, was held at the Church of the Sacred Heart in Donnybrook in the Irish Republic on Monday. Afterwards he was buried in his native Bellaghy, County Derry, in Northern Ireland. Heaney's final words to his wife were "Noli timere ... do not be afraid", sent in a text message from his hospital bed, his son, Michael, revealed at the funeral. Among those attending the funeral in Dublin were Bono and the former Irish president, Mary McAleese. The president of Ireland, Michael D Higgins, attended, as well as the taoiseach, Enda Kenny, and his deputy prime minister Eamon Gilmore. Northern Ireland's deputuy prime minister, Martin McGuinness, and Gerry Adams from Sinn Féin were also there.

Announcing Heaney's death on Friday, his publisher Faber said: "We cannot adequately express our profound sorrow at the loss of one of the world's greatest writers. His impact on literary culture is immeasurable. As his publisher we could not have been prouder to publish his work over nearly 50 years. He was nothing short of an inspiration to the company, and his friendship over many years is a great loss."

Heaney was born near Toomebridge, Northern Ireland, but as a child moved to Bellaghy. He was awarded numerous prizes and received many honours for his work. Death of a Naturalist, his first collection of poems, appeared in 1966, and won the Cholmondeley award, a Gregory award, the Somerset Maugham award and the Geoffrey Faber prize. In 1995 he was awarded the Nobel prize in literature. His collection District and Circle was awarded the TS Eliot Prize in 2006. Stepping Stones, a book of interviews conducted by Dennis O'Driscoll, appeared in 2008. In 2009 he received the David Cohen Prize for Literature. Human Chain was awarded the 2010 Forward Prize for best collection.

Heaney suffered a stroke some years ago. Afterwards he said, in an article for the Observer, that he realised he had not stopped working for decades. "I looked at the calendar after these days in the hospital. I thought, 'My God, you've never stopped, Seamus.' So, for a year afterwards, I just cancelled everything."

Paul Muldoon delivered the eulogy at the funeral on Monday, in which he referred to Heaney's "almost unseemly delight  in announcing, "Blessed are the pacemakers", after he was fitted with a heart monitor. You can read the eulogy in full here.
Among the tributes paid to Heaney last week  the poet laureate, Carol Ann Duffy, said that "he came to be the poet we all measured ourselves against, and he demonstrated the true vocational nature of his art for every moment of his life. He is irrepleaceable."

Former US president Bill Clinton, who visted Heaney in hospital after his stroke, said: "Both his stunning work and his life were a gift to the world. His mind, heart, and his uniquely Irish gift for language made him our finest poet of the rhythms of ordinary lives and a powerful voice for peace. And he was a good and true friend."

A celebration of Heaney's at Belfast's Lyric theatre on Saturday night was packed to capacity as the audience heard readings of his best-known works.

In the 2009 Observer article Heaney referred to living with the Troubles in Northern Ireland. He said: "These were very dangerous times. When the Provisional IRA began their campaign, people like myself, with a strong sense that things needed to be redressed, were excited."

However, he soon realised the futility of the violence. "There was a sense of an utterly wasteful, cancerous stalemate, and that the violence was unproductive. It was villainous, but you were living with it. Only after it stopped did you realise what you had lived with.”

Maurice Riordan, editor of Poetry Review, said: "Seamus Heaney was the great poet of our time, the one most equal to its history, in Ireland and elsewhere. His death is a great personal loss for his family and friends. It’s a great loss, too, to a vast community of poets and writers, and people who simply loved his poetry. For many he was like a father or an elder brother, resourceful and inventive in his care for people. He was a friend to presidents and celebrities, but also attentive to the person in the street asking for his autograph or for a book to be signed. His poems will live on, loved by many, and will indeed be loved by readers not yet born. Today the man is gone, the voice, the hearty laugh, the generous embrace. It’s the felling of a great oak."

You can read 'Digging', the first poem from Seamus Heaney's first collection, on the Faber website here. You can also see Heaney reading one of his poems here

An RTE programe on Seamus Heaney can be watched here

◄ Moments of joy, and links with art and song at Poetry School

News » 'When I battle, I insist I do it for real, that the battler doesn't go easy on me': Joy France on BBC Radio 4's Saturday Live

I read three Seamus Heaney poems at the Phoenix Cultural Centre in Woking last night. The Phoenix is primarily a music venue, with strong Irish roots. Nice to think that Heaney poems were being read around the same time in Sowerby Bridge - and in probably a lot of other places, too.

David Cooke has posted a fine poem in memory of Seamus Heaney on the Write Out Loud blogs http://www.writeoutloud.net/public/blogentry.php?blogentryid=38628

Puzzle Hall Poets on Monday (See gig guide, Sowerby Bridge) will have a focus on Seamus Heaney. Bring your favourite poem and celebrate his life and work. If you have a special area of knowledge about him, we can offer a 15 min slot to inform us.