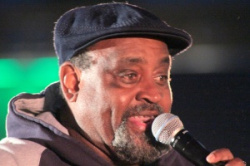 A day that began with voices including Maya Angelou, Doreen Lawrence, and the Dalai Lama reading extracts from Martin Luther King’s ‘I Have A Dream’ speech on the BBC ended for those in London with Architects Of Our Republic, a series of spoken word tributes from young poets to mark the moment’s 50th anniversary on the Southbank on Wednesday night.

The free event, staged on the Festival Hall’s Riverside Terrace and organised by Apples and Snakes, was witnessed by an attentive, enthusiastic crowd as host Jacob Sam-La Rose introduced performers including Hollie McNish, Dizraeli, and America’s The Last Poets, a group whose radical roots go back to the 1960s decade of the civil rights movement.

But if the mood was warm, the occasion was tricky for the poets. In one sense they had a thankless, if not impossible task. How can you match the inspirational words of King’s “I Have A Dream”, or even come close? And if no one realistically expects you to do that, there is still the danger of phrases and slogans intended to be uplifting and aspirational descending into platitudes.

On the whole that pitfall was avoided, and there were many highlights. A group of young writers aged 18-25 mentored by established stars such as Kat Francois stepped up to the mic to contribute an impressive piece with refrains of “this last 50 years of blood, sweat and fears”, and “fifty years, too long, too short”.

Hollie McNish sidestepped comparisons with King with a poem about her daughter and a plea to think more about children’s rights  – “I’m daydreaming now, about marches of kids” – and words that focused on specifics, such as park benches that are too high for toddlers to clamber onto them, rather than generalities.

Hiphop star Dizraeli and his backing choir had the crowd moving with the rhythm and repetition of words like “burning fire in my heart”, while Salena Godden delivered a long poem about her own dream of equality for women, that included ringing, angry phrases such as “patriarchal property” and “the manacles of segregation”.

Unlike the young poets paying their respects, The Last Poets are veterans who were around at the time of the civil rights movement, originated in the late 1960s, and have been credited as one of the earliest influences and inspirations for hiphop. There have been a number of groupings under the Last Poets banner, and the three-piece trio at the Southbank paid tributes to comrades that have fallen by the wayside in the intervening years.

They once voiced support for the Black Panthers, but they are older now, maybe their fire has dimmed a little, and the mood of their set at the Southbank was gentler, with messages such as “You are only a revolutionary because of your love, not because of your hate” that Martin Luther King would undoubtedly have approved of. As night fell, and people made for trains, the odd well-meaning slogan or two – “I want to live without fear … struggle for a better world” - crept in. But their view that Barack Obama can’t really change a “messed-up system” but people can, “if we only knew what we could do”, felt a little more realistic, and practical, somehow.

Maybe the Southbank occasion didn’t match the mood at the Lincoln Memorial in Washington all those years ago, but then, how could it? There were certainly moments, a group of singing marchers with placards and a band arriving at the start of the evening’s proceedings, when you felt a tingle of excitement and a shiver of something significant. The event also included specially commissioned films, choirs, and a Big Sing earlier in the day. All credit to Apples and Snakes and the Southbank and all those involved for marking the occasion in this way. Greg Freeman

How I Learned To Sing: Mark Robinson, Smokestack Books ►

Yes, they were on a hiding to nothing really, after the superb stuff on Radio 4 and on TV. Yet your excellent review captures a sense of occasion that allows those unable to attend to share. Thank you.