Versions of the North: edited by Ian Parks, Five Leaves 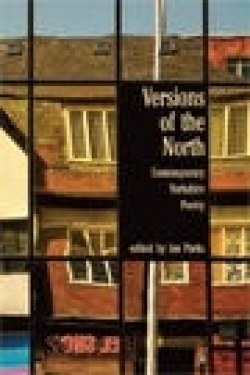 Kirkgate Market Cafe, Manningham Mills, Adel Crag, Flamborough, Warley Cemetery, Tinsley Towers, Humber Bridge, Holderness …  a seam of poems with  place name titles in this anthology of contemporary Yorkshire poetry  reinforces a sense of location, and the past rubbing shoulders with the present. Thus those Wars of the Roses soldiers who fought and died at Towton in 1461, believed to have been England’s largest and bloodiest battle, “crossed the river at the cooling towers” and “the A1’s dual carriageways”. It was Palm Sunday, and it snowed. As Stanley Cook, who died in 1991, observes in the poem of the same name:

They had to be killed by tens of thousands to erect

A small stone cross beside a minor road

I used to see that stone, near Tadcaster, and wondered at it, each time I drove back up to York from the south in the 1970s. A similar sense of harsh cruelty is echoed in Nell Farrell’s 'Flamborough', named so by the Vikings, with

where seabirds screech in desperation

to make themselves heard.

In his introduction to Versions of the North, editor Ian Parks is at pains to point out that “by ‘Yorkshire poetry’ we no longer mean dialect verse recited by men in flat caps with whippets at their feet (although there’s room for that, too)”. But at the very least, this anthology includes a sense of enduring Yorkshire values, of stubbornness, lack of ceremony, and a refusal to be impressed. In Barry Tebb’s 'Kirkgate Market Cafe':

Everybody here looks like a somebody, a Keith Waterhouse

Full of regret at a lifetime of selling his talent down river,

Free to sit and write pleasing no-one but myself

There are no stellar Yorkshire names in this collection; no Hughes, Armitage or Harrison, even though the shadow of the late poet laureate, in particular, looms large, as in Barry Tebb’s 'Hughes’ Voice In my Head', where he imagines Elmet’s archeaologist lamenting the lost mines

with their turning spokes,

Parks himself examines the aftermath of the bitterly divisive, year-long 1980s miners’ stoppage in 'Strikebreakers'. He picks out those who were lauded at the time by Margaret Thatcher but now find themselves shunned by their own communities decades later, huddled at the far end of the bar, with the sounds of the words “scraped” and “slag-heap” in the poem suggesting another, unmentioned but underlying word … scabs.

The darkness never seems far away. Ian Duhig’s 'Taking Possession' recalls a Leeds I remember, a city in the 70s gripped by fear of the Yorkshire Ripper and anger at the failure for years of West Yorkshire police - and detective George Oldfield in particular - to catch Peter Sutcliffe:

my first, and Sonia’s to Peter Sutcliffe.

Theirs lasted longer, thanks to George.

Chris Jones’s 'Home' has a prisoner who is about to be released hearing of a girl that has gone missing “somewhere between her local shops and home”:

I imagined her homeless, begging, skint,

gristle in a city that would swallow her whole

while David Wheatley encounters a wealth of ominous plumbing problems in 'Dark Water':

in your soul has spread to the ceiling

and the back bedroom wall.

There are a number of poems in this anthology that could have been written about anywhere. That is not to denigrate them; this is, after all, a diverse anthology of work by Yorkshire poets, rather than poems about Yorkshire. It is just that on the whole these more personal poems do not fire the imagination of this southerner, still yearning in some ways, after all these years, to be back up north, where landscape really is landscape. One shining exception is Elizabeth Barrett’s hospital-vigil poem, 'Kingfisher':

On her last day they pumped morphine through

her veins. I waited. Watched. It only took one

hour before a dart of brilliant green and blue

flashed past me (heading somewhere) and was gone.

Parks, who names Hull and Leeds as particular centres of poetic Yorkshire excellence, nevertheless maintains in his introduction: “With a few exceptions, most of these poems aren’t ‘about’ Yorkshire in the literal sense but are written out of a sensibility that recognises the unique quality of the place.” Most Yorkshire folk are generally – some might say notoriously – proud of where they live, with some retaining some head-shaking compassion for those who live elsewhere. At the end of this anthology you are left with a sense both of traditional, insular values, in 'Tinsley Towers', by Sheffield’s Helen Mort:

two fingers raised at the M1, at cars going

there are certain things that you recall;

the clinging breeze loaded with salt,

the way that the edges of the land

and sink into the sea.

◄ Poetry and all that jazz: Birmingham's Sunday Xpress at Adam & Eve