Blood and Glitter In Liverpool 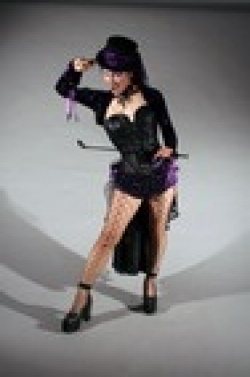 NWDAF & Dadafest in association with the Unity Theatre present:
BLOOD AND GLITTER!
Gory Gory Alleluia!  It’s Rosie Lugosi  - for one night only!
The Unity Theatre, 1 Hope Place
Liverpool, L1 9BG
Tuesday 10th February 2009, 8pm.Tickets £8 / £5 concessions
'Greetings Mortals... I do hope you're all sitting uncomfortably.'
Lock up your daughters, hold on to your hats and keep your hand on your jewels… prepare yourself for the Vampire Queen, Rosie Lugosi, bitch goddess top femme dominatrix from Hell in an extraordinary evening of vaudeville, comedy, cabaret and burlesque ?"featuring a cornucopia of daring and delicious performers, including Bollywood Superstar Jonathan Mayor, and burlesque beauties Diva Hollywood, Millie Dollar and Violet Va Voom!
There’ll be twisted tunes and perverted poetry, killer curves and killer fangs, hisses and kisses.
So give a warm hand ?" and throat ?" to the boot-stomping, whip-cracking, neck-biting, out-all-nighting, tongue-lashing, nail-slashing, Rosie Lugosi.
Rosie Lugosi is a mistress of musical mayhem - an electrifying comic cabaret singer, and one of the UK's most in-demand performers.  Her performances combine Terror with a dash of Tease, Glamour with more than a hint of Hellfire.
Winner of the 2007 Dada Award for Performance Artist of the Year and proud owner of an Erotic Oscar for Solo Performer, she has appeared throughout the UK as well as Europe, Ireland, Edinburgh and the USA.
She made her New York debut in 2008 at Don’t Tell Mama, where Time Out New York dubbed her ‘The English undead lesbian singer-comic icon’.   She has performed at prestigious venues ranging from stadium events to down-and-dirty clubs and events
... oh yes, and The Cheltenham Literature Festival.
‘Manchester’s very own undead performer extraordinaire.’ The Times

Hi Rosy!
Looks good will try and attend if work permits, whip us all!