Pop Up Poetry - Jamming for Oxfam 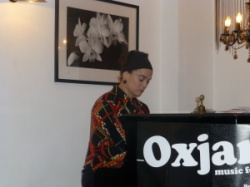 Pop Up Poetry's October gig was dedicated to collecting for Oxfam as part of Oxjam month, and we succeeded in collecting donations of £70 from an enthusiastic audience, as well as enjoying a brilliant evening of song and poetry - our tenth monthly event this year.

Dónall Dempsey hosted with his customary blend of Irish charm, persuasion (that's how we collected the £70!) and teasing banter and delivered some of his older favourites as well as some great new poems.  Three feature performers brought their individual magic to the evening and the open mic revealed new talent to Guildford, including (probably the youngest among us) Tom Vliestra and Josh.

The Leano filled the room with love and hugs (even though they learned to offer love very tactfully and take "no" for an answer when it was said, without delay!) Their tuneful, feel-good songs spread a warm feeling among us and Guildford returned the love enthusiastically.

Cathy Flower's passionate poetry was as always, powerful, evocative and thoroughly appreciated by her audience. Her wide range of mood, tone and pitch make her work memorable and original - we hope she'll be back to our stage in Guildford in 2013.

Steve Pottinger, from Oxford, brought his intense messages and strong story poems to the evening with a deceptively casual, conversational delivery that had his audience spellbound. We're looking forward to more from Steve, too, when he next roars down the A3 on his bike.