A Complicated Way of Being Ignored, ed. Michael Stewart 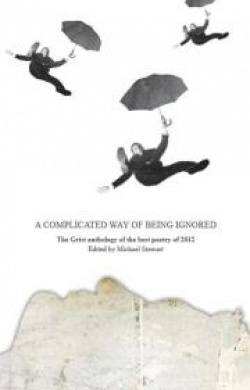 The problem with subtitles like “The Grist anthology of the best poetry of 2012”, is that they set up expectations that may well not be met. The critic, like myself, brings out his “I’ll be the judge of that, mate” cannon, and immediately starts looking for the stinkers, and the reader, also myself, starts to expect sparks to fly, revelations to arrive on gilded wings, or just a new way of seeing something that may be familiar but never quite this way before.

Well, I can safely say there are no real stinkers. Not all the poems work as well as each other; but they are reasonably well-honed examples of contemporary lyric poetry. There is a wide range of subject matter, from the mushroom collector neglecting his wife, to a toasted cheese sandwich. The editor has chosen only to put the names of the poets with their poems at the front of the book, rather than also beside their poems further within the volume. This is unfortunate, as read altogether the poems tend to blur into each other, and it’s had to find anything individual about them as a whole.

A poem like How A Man Leaves His Life-Long Wife, by Matt O’Brien with its anecdotal, chatty beginning:

they sat on each end of the bench

by the beach, eating in silence again,

is not a million miles away in style from Mushrooms and Other Fungi by Chris Raetchus:

Every evening at the top of the house,

he places No Entry on the door,

takes up the long-handled knife,

slices deftly into cap and stalk.

In both poems we have the careful observation, the plain diction, the straightforward narrative and the bland, featureless free verse of much contemporary lyric verse these days. There’s a lot of that kind of poetry in this collection: often anecdotal, well-written and shaped, and on the whole, pretty good.

Maybe I’m asking too much of poetry than that it do something more than merely tell a story that would be better told in prose, where at least you might have character development and a plot. But maybe we should demand more of our poets that they be merely chroniclers of the bleeding obvious, that they pay closer attention to the music of language, to the ideas and the forms they use.

This is, however, a perfectly reasonable, decent collection of poems. There are no stinkers, and there are no ill-judged verses. But neither are there any great poems here, nothing which “surprises with a fine excess”, or intrigues the ear or brain with an interesting and puzzling sound or ideas - which is why the word “best” is a hostage to fortune, I’m afraid. Steven Waling

A Complicated Way of Being Ignored, an anthology of established and emerging writers published by the University of Huddersfield, is available here

◄ Dam Robinson is compere at Write Out Loud Wigan

Write Out Loud at Stockport tonight ►

great to read a review that is for benefitting the reader and not the poet.

Just wanted to say that I enjoyed this review very much Steven, and got a lot out of it in terms of approach. Thanks :)