Talking Myself Home by Ian McMillan 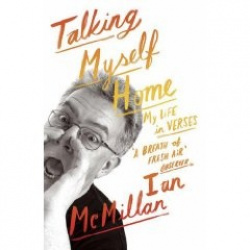 Ian McMillan hosts a weekly show, The Verb, on BBC Radio 3 and is a regular on Newsnight Review, Have I got News For You?, and the Today Programme.

He is not your stereotypical poet; those dusty chaps with measured voices as dry as unbuttered cream crackers, nor one of those too-clever-for-their-own-good writers who engage in ‘literary pissing contests’ (I have mentioned five obscure 16th Century French philosophers in my latest sonnet. Ha! I’ll see your five philosophers and raise you six Flemish astronomers - plus, I’ve written four of my lines in Latin). Instead, his rich Barnsley accent is as much a National Treasure as the man himself. His voice ricochets from the radio and TV set, bounces around your head like a rubber ball, hitting phrases, memories and emotions you didn’t know were stored there.

For some, the extreme Tyke-ness of McMillan is a barrier, but for all his ‘jovial poetic trollness’, for all his de-stuffing of the stuffy world of serious poetry, this man takes his poetry very seriously indeed.

Talking Myself Home - My Life in Verses (John Murray 2008) covers early memories of comics and school sports, bolt-hole libraries, dull jobs and heart-in-your-boots folk/poetry gigs, bookended with two poems about his mother’s death and her funeral. It’s as if memories flooded back between these two events: “trapped inside that empty space/You float in when your mother dies.”

McMillan says “Mine is a small life that’s happened in a big century.” These poems lead him home, are his ‘song-lines’. In several, he writes phonetically, as Swansea poet Stephen Knight did so successfully in his collection The Sandfields Baudelaire. All poems deserve to be read loud; these especially so, as they celebrate the lilt and rhythm of the voices and people that surround McMillan.

He records the collision between past and present, most movingly in Heart of Darkness, 1984. The poem zooms from the Miners’ Strike - “things are crumbling” -  to the future of “…Call Centres and the broken Community Centre windows/And the minimum wage jobs that crack you a little more each day/But let in no light, no light.” A bleak poem, spare and despairing; I wept as I reached the final stanza, finding it more powerful than the more obviously sentimental poems in this collection.

McMillan makes poetry look easy - “Words on this page/It’s as simple as that”. The exhortation in his introduction to “have a go at writing your own” disguises the fact that these poems are clever and carefully crafted. For all his love of words and language, wit and chatter, he is not afraid of silence, the empty spaces in poems - the unsaid - where images and phrases are free to develop inside our heads.

Sarah Maclennan is the co-ordinator of Dead Good Poets Society, Liverpool. Find out more about her at http://www.writeoutloud.net/poets/sarahmaclennan