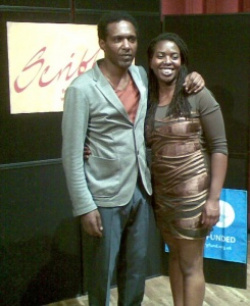 I can think of no finer place to celebrate the poetic outcomes of community writing projects than Oldham Library, not just because of its contribution to the existence and direction of Write Out Loud, but also because of the building’s physical position, of which a little more later.

It was in that library’s older, Victorian buildings whilst truanting - pegging off – from Greenhill Grammar School that I educated myself and developed my love of poetry, by reading stuff like Spike Milligan’s Silly Verse for Kids, arcane dialect verse, and classics such as Thomas Gray’s Elegy Written in a Country Churchyard, which is perhaps my favourite poem, with its themes of life chances, of people’s potential remaining largely unrealised, with lines like: some mute inglorious Milton here may rest, some Cromwell guiltless of his country’s blood , and some flower born to blush unseen and waste its sweetness on the desert air. This poem informed my beliefs about, and my lifelong interest in, education which in turn inform Write Out Loud’s raison d’être; themes, it seems to me, that inform Cartwheel Arts’ hugely-successful Tell Me Another One projects, the latest annual celebration of which was last Thursday’s Scribble Festival.

The projects bring together (always the hardest part of community projects) people from various backgrounds to tell and write their stories, through poetry, story and song. Cartwheel’s stated mission is to encourage ‘those with little experience of the arts to develop their creativity and talents’. I think what they really do is find people whose voice might not otherwise be heard, and equip and encourage them to express their stories; help these flowers to be seen blushing. Having witnessed and participated in Cartwheel Arts’ work over several years, I applaud the consistency of their success in this venture, and believe it is worth far more public money than some of the more spurious projects commissioning ‘young poets’ to bleed their adolescent angst onto page or stage; of which more later.

The Scribble Festival is a celebration of, and showcase for, the writing groups’ ouput. This year’s had a day of workshops with Shamshad Kahn, Helen Clare and Tony Walsh, and an evening of poetry, stories and songs from the community groups, read by themselves, with additional sets by Chanje Kunda and Lemn Sissay.

As always, the stars were the community writers, expressing their own lives, thoughts, ideas - a privilege to hear as they read them in public, often for the first time. I apologise for not having the names but they did not feature in the programme, an omission in my view, as there was some magnificent work, not least Katie Haigh’s moving evocation of what I took to be her experience of anorexia. You never know, she might repeat it at the Middleton Write Out Loud night she is currently caretaking. A special mention must go to the woman who read in halting English, enunciating carefully, seemingly painfully at times, determined that her words be heard. They were, and grateful were we who heard them. For me, this is what these projects are about: flowers whose sweetness is no longer to be wasted.

The Scribble project also has a magazine that publishes contributions from its new writers, alongside more-established ones. This all builds into a wonderfully holistic venture wherein non-writers become writers and have outlets for their work. There should really be more of this Cartwheel work across the country, encouraging creativity and giving communities a benign means of expression, a voice.

I was less moved by the guest-poet element of the evening, and – forgive me Rick and Emma – question whether it really did what I am supposing you intended. Don’t get me wrong, Lemn Sissay is always, but always, worth his fee. Trouble is, he had only just got into his stride – a third poem and some fascinating discourse - when compère Dominic Berry announced ‘time up’. Quite apart from being a distinguished poet, Lemn’s between-poem discourse is perfectly suited to a forum in which identity potentially plays a big part in people’s writing, given the part it plays in Lemn’s. So, why invite him and give him such a short set? When he was effectively elbowed off, the disappointment was tangible. Compère Dominic clearly had to manage the time, which he did superbly. The pity is that he had to.

This is no reflection on Lemn or Dominic; or on Chanje who, of course, had her set to deliver first. But why? Sure, she is spot-on for a guest slot at an open-mic. But what contribution did poems about her Amsterdam love affair make to this occasion? What proportion of the audience could identify with her experiences of drinking white wine on an Amsterdam pleasure cruise, or writing about it for a funded project? Where were the universals? A naked emperor moment for me, this. If we could have had an hour or two of Lemn instead, I am convinced it would have complemented the community poets’ work superbly. If only. Hey ho.

Write Out Loud has contributed to Cartwheel projects over the years, formally and informally, not least our jointly establishing Write Out Loud Middleton poetry open-mic that has flourished for about seven years, has encouraged many new writers and performers, and other, spin-off initiatives.

Oh, and the physical location factor? When its curtains are not closed, the performance space that hosted this event has a window that looks out across Oldham’s Waterloo Street area of Glodwick, scene of the riots that were in full swing eleven years to the day from this event, riots that I still believe owed much to the lack of a voice for the different communites involved. The area was also once home to my dreaded alma mater, Greenhill Grammar.  Both of these facts contribute to my appreciation of Cartwheels Arts’ superb, vital work.