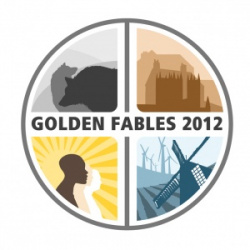 A poetic drama featuring words by Archbishop Desmond Tutu and fables by poets Ian McMillan, Gillian Clarke and Liz Lochhead is to form the centrepiece of Lincolnshire’s contribution to the Cultural Olympiad.

Golden Fables 2012, which has been commissioned by Lincoln-based cultural solutions UK, has taken the county’s myths, legends and rural heritage as its central theme. McMillan, Clarke and Lochhead, together with Lincolnshire’s poet laureate Joel Stickley, have each written a fable based on Lincolnshire that will be set to music.

The music for Archbishop Tutu’s words and Clarke’s fable is by composer Tim Dalling. Gabriel Prokofiev – grandson of Peter and the Wolf composer Sergei – and Luke Carver Goss are setting the other poets’ words to music. The completed works, which will be sung a capella by the 90-strong Harlaxton-based Choir Invisible - The Desmond and Leah Tutu Peace Choir (UK) - will get their world premiere on 1 July at the SO Festival in Skegness.

Executive producer David Lambert, of cultural solutions UK, said: “In January last year when we were asked to come up with an idea to help the county celebrate the Cultural Olympiad. We wondered how we could bring together something which would reflect the county’s strong rural traditions.

“We were stunned by the enthusiastic reaction we received when we mooted the idea of a drama-based around poetry and music and I think that’s reflected in the calibre of the artists who have got on board. And to get permission to use Archbishop Tutu’s words was just overwhelming.”

The performance will feature a backdrop of images created by award-winning graphic novelist Kate Brown. A narrative written by McMillan and performed by actors Rebecca D’Souza and Des Coleman and original instrumental music played by the Berkeley Ensemble will link the works.

Golden Fables 2012 is being performed at the Embassy theatre in Skegness at 2pm on Sunday 1 July. Tickets are £5 (£3 children) from the box office on 0845 674 0505. It will also be performed at the Latitude festival in Suffolk on Saturday 14 July. More details

◄ Live Poetry: An Integrated Approach to Poetry in Performance by Julia Novak

Alice Oswald on the scent of poetry ►