Dominic Berry's Wizard: When the world comes knocking at the door 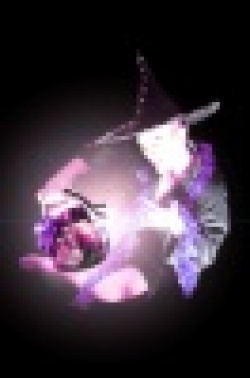 Dominic Berry’s poetry-fantasy-theatre extravaganza Wizard, seen at the Cockpit theatre in north London, is a cri de coeur on behalf of those who need to weave spells to make sense of the world about them. It sparks with jokes and wit, and with a mesmerisingly energetic performance from Berry as the Wizard; but although often very funny it is not ultimately a bundle of laughs, and indeed is quite disturbing.

The Wizard, apparently so in control, is unable to leave his flat and is befriended by a computer-obsessed neighbour, who shops for him. The neighbour, played by Ben Jewell, has problems of his own. He once spoke at a deserted open mic, and has creative ambitions; but the Wizard is dismissive of his efforts at rhyming.

Early in the performance - fresh from a run at Manchester’s Contact theatre - Berry interacts with the audience, the “carpet goblins”. However, his preferred relationships are with kitchen utensils; a tinsel-clad kettle called Ursula, and a points-scoring dish rack.

The poetry, often half-submerged beneath the theatrics, contains robust Shakespearean rhythms. There are also Beckettian undertones in the staging; the piles of rubbish, obsession with objects and the basics of existence, such as the healing powers of tea.

But as the world comes knocking at the door and paranoia takes over, the Wizard, his existence fatally disrupted, spurns his neighbour’s dogged efforts to help and sends him packing, and admits defeat in his attempt to keep it all at bay.

As the production moves from light to dark there is never a dull moment; the intensity doesn’t slacken. And this stimulating, thought-provoking show - directed by Martin Stannage, with additional material by Dave Viney - raises the question: just how many of us prefer to live in some kind of virtual reality these days? Wizard’s author Dominic Berry, as he told the audience at the conclusion of the show, is just asking. Greg Freeman

Wizard is being performed tonight, Thursday 3 May, at the ACE Centre, Cross Street, Nelson, at 6.30pm. Tickets: £8/4, book online  or phone 01282 661 080. On Wednesday and Thursday 9-10 May  the Wizard will appear at Oxford University’s Corpus Christ College, in Merton Street, at 8pm. Tickets are £7/5, available from the venue on the night.

The Heart and the Subsidiary: Fatima Al Matar ►