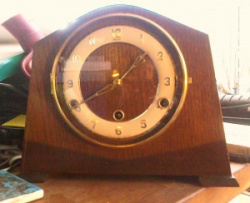 The only things that matter in life

Are time, and suffering, says my friend Maisie,

Herself a philospoher, with two degrees,

One in philosophy, so she should know.

And time is fascinating, she says; odd choice of word,

Personally, I used to have no time for time,

It passed me by like a river flowing round a stone,

Until I got my new clock; new to me, that is

Though half a century of time has uncoiled

From its mainspring, up til now.

What is this stuff, time? No-one knows, says Maisie,

And true, I do know little of clocks, time’s messengers,

Though I know lots on suffering,

Having made copious notes,

Sometimes referred to as “poems”.

Sometimes, time ekes it out in gobbets,

And other times, clusters of sufferings.

My new clock ticks them off, one by one,

Within its wooden walls, its cheery face meanwhile

Its chimes cathedral me through the day

And through the long canonical hours of night

Ding-donging its echoes of gothic arches,

And the Garden of Wiccamical Prebends

Its polished case regulate my every task,

Of wheels with teeth, and chains,

A lever-arm, a rack, even a snail

Are caught up in mechanical suffering.

And so I let it count my seconds, tick each day away:

In truth, I have no option – tradesmen call,

Or couriers with deliveries, “before twelve”, it marks them all,

I’m killing time, or time is killing me, and suffering runs on

Like the brown Ganges round a rock, and every tick

While the church clock stands at ten to three

While there’s honey still for tea, each seven seconds,

Do hands sweep over faces to catch hot tears,

Or is that time’s pursuit, not suffering? Or both?

There’s one born every minute, so they say,

But maybe God needs winding up a bit,

On his bad days, when he says “suffer, little children”,

And really means it.

Time will bring suffering to an end,

Or vice versa, therefore do not seek to send

For whom the clock chimes: it chimes for me.

Thanks Laura, it's actually not physically possible to offend me in any way so don't worry on that score! I really appreciate that you took the time to comment. As with many things I write, I have already seen bits I would change myself, so I appreciate all the valuable feedback I get on here!

Mmm I found most of this really good and interesting. It started slowing down (no pun intended, heh) at the 5th verse. Everything before that I thought was great. It's a concept I often ponder, and I like the whimsicality of this sort of meandering piece. I bet it's great read out loud.

It gets back on track in the 7th verse, but (and I really hope you don't mind me saying this) - I think it's a little too long. The good bits are REALLY good, and the other bits...could be left out and the poem tightened up. That, for me, would make it read better.

But I am no expert, so please don't be offended, or take it the wrong way. It's your poem, not mine :)