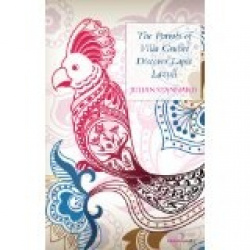 Julian Stannard's Parrots, published by Salmon Poetry, is the third volume of a trilogy, set mainly in Genoa where the poet lived and taught for years.  The title poem concerns the narrator's occupation of a flat high in the roof of a tall building and a rooftop lookout where “unlikely parrots visit the window sills”. This is a beautiful, lyrical poem about the sea and love and lies and loss.

”The view of the sea! Some days I thought I had turned into Zeus”

Many of the works in the first half of the book are set in Italy, with a fascinating cast of characters that weave in and out of the narratives:

“The old lean priest standing in the piazza.
Sin is beautiful, he says, sin has many gaudy wings,
& without it I would be out of a job and he winks ...”

Other priests are busy blessing salami and octopus. There is focaccia in the coffee houses, jasmine tea in the Bar Degli Specchi. But in case anyone gets jealous (which I was tempted to do on a number of occasions  while sitting at my computer listening to the rain falling on next door's noisy building works) the poet reassures us he is not going to talk about rocks and pine trees:

”And why should I talk about olives
when I crush them underfoot on my perambulations?”

It is a collection which offers the reader a sense of professionalism and finished quality. The handling of line lengths is one of the most impressive things about Stannard's work. He tends to use a long line across to the right hand margin and never overdoes punctuation.   It can be five or even six lines before you get a stop, but the pace never seems hurried, nor did I find myself mentally gasping for breath.

”We could talk about the spirituality of seafaring”,  says the poet in the surreal Villa Giovanna.  Well, yes, we could, and we often do as we read through these poems - and very enjoyable it is, too. Am I right in thinking that it is often assumed that being on water is a spiritual thing, but little examined why? Stannard takes on this task - not in a navel-gazing way -  but as a fond and forgiving observer of lives that are acted out  against his sometimes surreal Mediterranean backdrops. For example, there is a sonnet-length poem in the form of a letter addressed to Miss Sarah Woodruff (the heroine of John Fowles' novel The French Lieutenant's Woman) from an imaginary retired sea captain in Genoa, mourning the loss of her “fanciulllezza” to a Frenchman! There are also poems covering a partially joyful ride in a boat over choppy waters and unsettling Dali-esque findings on a beach.

The collection deals with physical journeys but also interior ones:  a relationship with a son, the loss of a brother.  Soup lauds  the maternal kitchen and the ties that bind between food as love/food as faith (which anyone who has cooked for a family for 30-odd years will not find at all contradictory), between food and more food.

Soup is God's younger brother
Soup is Corinthians
Soup is patient, soup is kind:
it does not envy, it does not boast.

What I loved in many of these poems is a lightness of touch that is able to deal with serious themes - even in one or two cases heartbreaking ones - without leaving the reader reaching for a bottle of whisky and a couple of Valium.  I also enjoyed the collection for its profound sense of place .  For the first time it occurred to me that a book of poems can be read as a meditation on travel in the same way, say,  that Alain de Botton might be.  Not as a physical map of the nearest Renaissance church, more a mental map of what it feels like to be a painted character in a trompe d'oeil city waiting for a tram.   Don't expect the geographical locations to remain solid.   That is the advantage of poetry over straight travelogue; the poet can drift in and out of the realm of dreams and psychology.

Then again the work can be hard-hitting.  In the poem Ciao Capo a young Senegalese boy is trying to sell “designer” shirts along a beach:

Don't ask me if they're fake
and don't say.  Will you be here tomorrow?
because I might be dead tomorrow.

There is much more but I have run out of space.  So  if you wish to discover the fate of the Sardine Liberation Organisation - you will have to buy the book.  Frances Spurrier