DIVING FOR SHINY THINGS by Lisa B 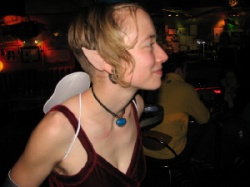 “Diving for Shiny Things’ is an appropriate title for this anthology by Canadian poet Lisa B.  I dived deep through fifty two poems, snagged my beak on what promised to be gold but, far too often developed into ‘therapeutic’ writing; and got my wings trapped underneath the sheer volume of this weighty booklet.

There was gold, and it shone, but did indeed need sifting for. Much of the writing could do with a good editing.

However, it was well worth the delving, and the following fifteen poems, if presented in an anthology of their own, would crackle and sparkle right off the poetry platform: 110 Again, Reason to Ride, Reclaiming Hummingbird, This Free Service, Saturday Afternoon in Chorlton-cum-Hardy, Thank You Letter,  Blueprint,  A Small Voice,  It’s Not the Bears,  Highway 43, Flash and Turn, The Guide Books Were Wrong, England - Stop apologizing, Fully Received, and Ditch Daisies.

There is such variety in Lisa B’s writing, both in style and content, that it is hard to discuss her work collectively. Even with this reduced list the best that I can do is rifle through some of my ‘shiny’ finds and put them on display.

Her writing is at its most powerful when she distances herself from the emotional intensity of the moment, which is particularly true in the poems relating to her father.  THANK YOU LETTER is harrowing, understated, yet spiked with a single direct reference to her dark childhood, which cranks up the tension and adds to the overall restraint of the ‘letter‘.

… at the risk of sounding sentimental, I think the sweetest part of that
evening was how it took me right back to my girlhood ?" to the times
when you’d laughingly explain to me and my sister that we were mistaken, that we actually did like the way you were touching us! …
110 AGAIN:  Daring and sexy, this frank presentation works.  The subject is unrestrained, the writing tuned and honed like the 1982 American Eagle station wagon she was ‘driving’ down the highway.

She knows by now
To keep a small bottle of lube
In the glove box on road trips with me …
SATURDAY AFTERNOON IN CHORLTON-CUM-HARDY: Insightful and compassionate. A small boy is chastised by his mother, and the writer’s impotence and resonance is communicated well in this mini-drama.

She hisses instructions to her shaking son and as the child stumbles
back inside to approach the counter and sob out how sorry he is I’m
remembering vividly the strangers made to participate in my humiliation
and my own lessons in forced apologies, on sunny days spent wishing
bitterly that I hadn’t ruined the WHOLE DAY with a stupid, stupid mistake.
IT’S NOT THE BEARS deserves a special mention, powerful in both content and restraint. A strong voice for ’eight of the eleven’ sexually-harassed ‘female fire lookouts’ .

… I won’t get into how it tore at my heart to hear of the young woman
at a mountain lookout last year who climbed into the cupola atop her cabin
at 1 AM while drunk men from the oil rig down the road shouted and
pounded on her door.

I won’t linger on the topic of how angry I am that she had to sit on the hatch
clutching bear spray and a knife, weeping and waiting for the Royal Canadian
Mounted Police, who didn’t bother to show up…
THE GUIDE BOOKS WERE WRONG, FLASH AND TURN and DITCH DAISIES sees the poet flexing her metaphor muscle; a refreshing change.  The direct voice of the writer is replaced with poetic imagery.  There is space in the layout and the content, giving the reader chance to step forward towards the poem.  In the following extract from The Guide Books Were Wrong, Lisa B uses the metaphor of the ‘decrepit cottage’ to communicate her acceptance and celebration of the ‘brokeness’ in her life.

The most amazing place I’ve been so far
This side of the Atlantic, is just up the road
At the top of an overgrown orchard
High above the village, there’s a tiny cottage
Ancient and decrepit with the roof fallen in
Shelving draped in ivy, dangling by a nail
Flaking green paint on a splintered front door
Grass and wildflowers growing up through the floor …
… so
if you wanna take a walk up the road
past the bits of broken dishes and glass
scattered in the vineyard
to the top of an overgrown orchard
I might offer up perfection
In an instant of acceptance
With some flaws that don’t want fixing …
I admire Lisa B’s honesty and daring and, looking at the entire fifty-two poem collection, it is fair to say that her writing has flashes of inspiration, flashes of insight, flashes of poetic imagery and flashes of structure  - it’s knowing how to keep that flashlight on - I think an ever-ready finger on the edit button would guide this poet to the treasure which she obviously possesses.

About Lisa B
you can read more about Lisa on her poetry CV by typing - Lisa B - in the search facility at the top right of this page.

About the reviewer
Louise Jones has an MA in Creative Writing from Bolton University where she got a distinction for her poetry collection; she is a piano and keyboard teacher, a member of Salford Women Writers and teaches creative writing in schools, adult groups and workshops in the North West.

◄ Does Your Chewing Gum...