Poets battle it out at Durham mega slam 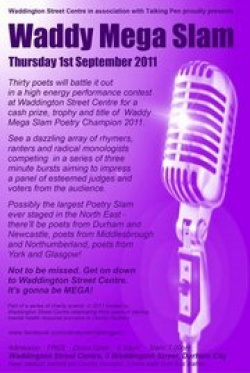 Thirty poets are due to battle it out at a gigantic slam in Durham on Thursday 1 September. The Waddy Mega Slam, presented by Waddington Street Centre in association with Talking Pen, is part of a series of charity events in 2011 hosted by the centre, celebrating 30 years of mental health resource provision in County Durham. The poets will be battling for a £50 cash prize, trophy and title of Waddy Mega Slam Poetry Champion 2011. Admission is free, doors open 6.30pm, and the slam begins at 7pm. Waddington Street Centre, 3 Waddington Street, Durham City, is near the viaduct, behind old County Hospital, and three minutes’ walk from the bus station.

◄ Support the homeless - with a chance to get your poetry published