by Stuart A. Paterson 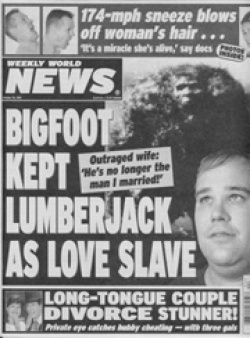 See what can happen?

Now here’s a tale, of men and mice

(Though which is which I leave to you)

Whose aliases must suffice

(And sadly must their motives too).

It happened one cold winter’s night

When snow lay thick upon the hills,

When is hot and ’s white

And all is quiet around the stills.

But not that night! Filled full of ale

Home upon his lonesome trail,

The time for wild celebration,

A time abandoned and outwith

Three miles it was to house and home,

A trekking feat, a mighty job,

And chance encounters with his own

Would not deter our hero,  Rob.

And stepping over each prone haggis.

And then…from out the woods appeared

A ghastly figure long of gait

In front of him, so fell! so weird!

Form shimmering in a parlous state.

Rob stopped in time and stumbled back,

And from a distance cried aloud,

“Tak what ye will! Alas! Alack!

But there it posed and there it stood,

Responding not, its body still,

Hirsute and reeking of the wood,

Considering Rob (as most folks will).

Unnerved, unsure of what to do,

And thrust it out, as you would do,

And cried “You only had to ask!”

Big hairy creatures of the wood

Are not seen as conventional.

As paw grabbed flask (as any would)

Our hero Rob, quick as a flash,

Dived through the portal, reappeared

Proclaiming “NOTHING steals my beer!”

(The rest is tale & just conjecture,

Filled with references to rodents.)

Yet be assured, I heard it tell,

That Rob knew this, and knew it well….

'UNQUIET SLUMBERS FOR THE SLEEPERS' ►

Great! Reads like a good, sharp, ballad. You should be pleased, very pleased with it.

Your not by any chance related to Banjo Paterson are you Stue. As your tale is very reminiscent of his style of poetry its good . I love it, more more more.---.

Where is that newspaper clip from?! Greta poem, reads like a folk story, It felt like a storyteller telling a tale to a group of people. Good stuff
"Big foot is a great big fella! But not even he can have my stella!"