Was Wizard worth watching? - a review 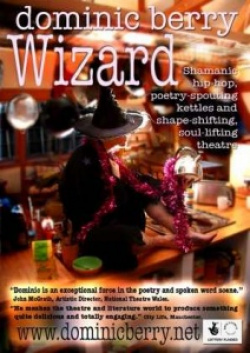 What happens when a popular performance poet works up a wizard idea? Magic materialises! Or does it?

Dominic Berry, that ubiquitous, powerful presence on the Manchester spoken-word scene, last week presented his drama, Wizard, to an invited audience at Manchester’s Contact Theatre. To have a ‘sell-out’ for a preview is a measure of Dominic’s popularity; but popularity is the not the same as critical success. Did Dominic avoid the fate of so many pseudo-poetic pieces turned into drama: becoming nothing more than a longer, yawn, open-mic poetry set?

Deftly directed by Martin Stannage, Dominic’s story is of the agorapobic ‘Wizard’ holed-up in his flat.  According to the pre-preview blurb, our protaganist can “…see magic in places most people can't: a dragon ninja drag-queen scaling his shower, a menopausal midwife haunting his kettle. When Wizard shares this world with a friendly neighbour, three days of events will change both their lives for ever.

I must declare here that I am a lover of naturalistic theatre and film, so my heart sank when I read this  description. Where’s the beef? Where’s the drama? Where’s… but, hang on a mo. Let’s ignore the blurb and look at the play itself. Ah, yes. Here it is, in the script, in the themes, in the setting. OK, let’s start again.

An agoraphobic benefits claimant struggling to survive in his high-rise flat seems to be suffering delusions, perhaps bordering on paranoid schizophrenia. His neighbour, ‘man’, pops in and out with tea and sympathy. He goes along with Wizard’s delusions, making no attempt to challenge them or steer him towards professional help. Man prefers to drink tea and recite rhyming verse with him. When the authorities close in, Wizard is caught by the blunderbuss of bureaucracy that is the current state’s social care system; with tragic consequences.

Dominic has created some exciting, challenging themes in this piece, ones that capture the zeitgeist in a potentially neo-Thatcherite era.The approach of ‘man’ superbly mirrors that of our society and our government: full of good intentions and fluffy words that are no substitute for caring about people, real caring that involves engaging with and challenging, as well as simply ‘being nice’. It also has echoes of the 2001 film, A Beautiful Mind, playing as it does with our perceptions of reality.

There is so much in this piece that will make a powerful play, with further development and produced by someone like the Royal Court Theatre, if that is what the playwright intends. It does suffer a little schizophrenia itself. Is it trying to be a powerful drama or an extended open-mic poetry set? After the show, Dominic joked about wanting to make a musical, mentioning, I think, Abba. Why not? Its theme might be that it’s a rich man’s world and the poor can go and have their delusions in a tower block somewhere up north, so long as they have filled in all the appropriate forms.

For a largely amateur cast, the acting was superb, Rod Tame needing special mention for his playing of Wizard; though the difference a professional cast would make was exemplified by Gerry Potter’s powerful voice-over with his meticulous enunciation.

Excellent writing, great production and congratulations all round. The acid test? I thoroughly enjoyed this staging, would watch it again and look forward to seeing where the team takes it from here.

THE DRIER THE BRIGHTER - reviewed by Cynthia Buell Thomas ►

Excellent summation with which I agree - David