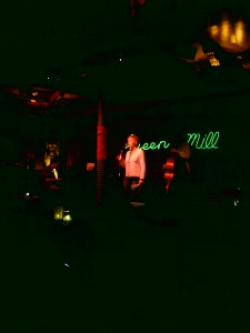 I was travelling in America in October and while I was there I did this poem at Chicago's famous Uptown Poetry Slam, 'where slam began', which was a fab night, go there if you can! Well I had to didn't I? This poem is about my fascinations and contradictions about that great nation, partly why I was there. (The photo is me, there, honest, just taken on my rubbish mobile.)

I don’t know why

for all your brashness.

I want to go to America and fly the flag,

and look into suburban gardens

I wanna be Laura Ingalls.

Little House on the Prairie

in a covered wagon,

with Ma and Pa

and a bonnet on my head.

I wanna be a cowboy,

no, Bonnie and Clyde

with my partner in crime

sat at a dusty gas station

in the middle of nowhere

and an old man in a battered hat looking at me

rolling down the road

or the turbulence of monster trucks.

There is a magic potion

that can make you dream the American dream.

When I drink Coca-Cola

the sun comes out

and the children on my Lancashire street

and become full of colour and light.

Their teeth are white.

The grey streets of England clear of traffic

and people of every nation turn to each other

and hold each other’s hands.

Coke tastes like flying over a beautiful, benevolent land

in a hot air balloon.

It makes everything better.

All my friends look younger and more beautiful.

and we have more fun.

Coca-Cola helps us to see all things the same,

and so, there is peace at last.

an instrument of torture if used correctly.

Oh let me beat you over the head with this Coke bottle!

all will be well.

Everything is big in America,

they have the biggest of everything.

Roads and prairies that go on forever

And they have the biggest rubbish dump in the world,

Floating right there between California and Hawaii

Twice the size of Texas, yessir!

Fifty years of throwaway washed into the sea.

Where Coca-Cola bottle tops bump up against

A Macdonalds cup all the way from Japan!

The biggest snowglobe in the world,

the blue Pacific mixed with

a billion pieces of sea-worn plastic

every colour of the man-made world

of no more use, no more purpose

That will never settle.

I wish I could be famous enough to be made of plastic.

Celebrity moulded forever into a doll.

Then one day I could swim with all those bright stars in the Pacific too.

I wanna be a part of it!

Yes Emma, you've captured it well - the fascinations and contradictions...
I love part two, and the line 'I wish I could be famous enough to be made of plastic.'