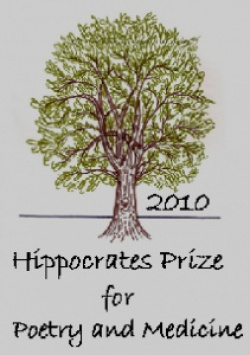 Wales’ first national poet Gwyneth Lewis and outgoing Chair of the Royal College of General Practitioners Professor Steve Field CBE have joined the judging panel for the international competition for poetry and medicine, the 2011 Hippocrates Prize, which has an £15,000 award fund for unpublished poems in English.

The prize has two categories: ‘open’ awards, for which anyone in the world can enter, and a UK NHS-related category which is open to National Health Service employees, health students and those working in professional organisations involved in education and training of NHS students and staff.

With a 1st prize for the winning poem in each category of £5,000, the Hippocrates prize is one of the highest value poetry awards in the world for a single poem.

Many outstanding poets have written their best work in their late teens. This time therefore, with the support of the charity Head Teachers and Industry, the organisers are also inviting young poets to take on the challenge.

The inaugural 2010 Hippocrates Prize attracted over 1600 entries from 31 countries, from the Americas to Fiji, Finland and Australasia.  The winner in the ‘open’ category for 2010 was New Zealand poet, writer and critic CK Stead; the winner in the ‘NHS’ category Wendy French, who facilitates creative writing for NHS professionals.

About their 2010 awards CK Stead said he was surprised and delighted to be the first winner, and remarked ‘I’m very happy the judges felt the experiment [writing about his own stroke] worked, and enormously grateful for this generous award’; and Wendy French said“I'm thrilled to have won the NHS section of this prize as my father was one of the first doctors to work for the NHS when it was formed in 1947.”

Professor Singer said: “We are delighted to be continuing the highly successful format of the inaugural Hippocrates Prize, which resulted in Open and NHS awards to nationally and internationally recognized poets. A new twist is that we also now aim to encourage as many as possible aspiring young poets to take on the more established poets in the competition.”

Michael Hulse added: “the term ‘medical’ can be interpreted in the widest sense. Entries are open to members of the public, poets, patients, their friends and families and to health professionals and students. All winning and commended poems will be published in a further Anthology of 46 poems. We thank the Fellowship of Postgraduate Medicine, Warwick’s Institute of Advanced Study, Head Teachers and Industry and the Cardiovascular Research Trust for their support.”

The closing date for the 2011 Hippocrates Prize is 31st January 2011. Awards will be announced at an International Symposium on Poetry and Medicine on 7th May 2011. For details of how to enter the 2011 Prize, and for the Anthology and podcasts related to the inaugural 2010 Prize, visit http://www.hippocrates-poetry.org/