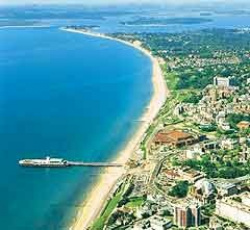 Once you agree to take part in a festival, time gets distorted. You start a year ahead, the first six months or so slide past and suddenly our Chairman, Lillian Avon, who also founded the Festival, is talking seriously about the need for more frequent committee meetings and firming up on venues, tickets and publicity. And then, help, it’s here!

The next seven days from 22nd to 28th October, are an adrenalin-packed mix of drama, poetry and fiction. My event, a Poetry Slam, is last so it doubles up with the end of Festival party. I volunteer to make a birthday cake – this is totally stupid of me ‘cos I can’t cook.

I attend as many of the events as physically possible, one person complains that the Bournemouth Heritage Walk conflicts with ‘She Opened the Door’ a new play by Peter J Cooper where Thomas Hardy’s women, real and fictional, merge in a fantasy based on fact. Well you’ve got a choice, haven’t you? Incidentally, AsOne Theatre will be performing this again on 6th November at the Mowlem Theatre, Swanage.

I learn about Haiku from Chris White, meet other writers at the Networking and Getting Published events, work with kids at a story-writing session by author John Houghton (The Oswain Tales) and get a taster for the Slam by poets at Monique Munroe’s Charity event.

We’re lucky with the weather. On Saturday Martin Baum, author of Oi Mate gimme some more, is at home for a dayin a beach hut donated by Bournemouth Council, to encourage others to try his working methods.

After early showers, brilliant sun brings tourists, families and couples along the prom, stopping for a cuppa and a chat with the Festival team.

My Slam goes well, with guest poet John Kay going down a storm and none of the contestants tripping on the high step to the stage. Nobody disputes the winner, John Barclay, and I even remember all the words of my poem. Chaotic, yes, at times, but a great night.

We’ll be back again next year.