I, A Diskordian Pope In the Church of the SubGenius Of Uncle "Bob" 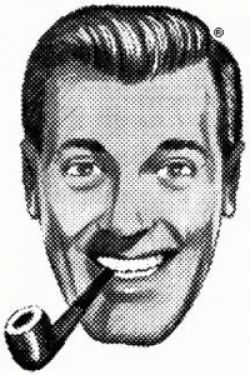 I, A Diskordian Pope
In the Church of the SubGenius
Of Uncle "Bob"


Characters: A Pope by direct and incontrovertible Sacred Apostolic
Succession in the Diskordian Church of the SubGenius of Uncle "Bob".

Scene: A stage and/or a microphone, maybe an audience?

Authority & Obligation: As a Diskordian Pope, invested with the authority
bestowed upon me by such direct and incontrovertible
Sacred Apostolic Succession in the Church of the
SubGenius of Uncle "Bob", I am, therefore, able to confer
the same status upon you all. In other words, I can make
you all Popes. Not only am I able to make you all Popes
but in fact I am honour bound to do so as it is a sacred
obligation of my most high and exalted position in the
Diskordian Church of the SubGenius of Uncle "Bob".

Ordination: So, firstly, please may I have the undivided attention that
this most solemn and sacred of ceremonies deserves? For
a few moments, silence and stillness, no talking, drinking,
scratching your balls or whatever else you may be so
inclined to do at the moment.

Duty: Now that you are all Diskordian Popes in the Church of the
SubGenius of Uncle "Bob" you are all now infallible and I
should spend a few moments outlining your duty and
explain the basic philosophy of Diskordianism. Your sole
duty is due neither to me, nor to the Church but to your-
SELF. Your single prime duty is Independence of Thought
and Freedom of Action with SELF-responsibility. You are
now free to think, act and behave in any way you see fit
and must therefore take responsibility for your own life,
your actions and RE-actions.

Philosophy: The first and only principle of being a Diskordian is to
accept no dogma, no ideology or catechism. We are not
sheep or part of the herd-mentality. We ARE individuals
free to think and act for OUR-selves. It is our moral
obligation as fellow Diskordians to stick APART.

OK so now you are beginning to understand the relative
nature of your Diskordian SELF. There is no Absolute truth
or OBJECTive reality. There is only the truth of our own
perceptions based upon the reality we have constructed for
ourselves. This is not dogma and it may be tested, in fact
our single Diskordian purpose is only to test this reality for
ourselves, realise the truth of out own Diskordian BE-ing
and expand that reality. Each of us lives in a separate
reality based entirely on our imprinting, conditioning,
experience or memory (and this may real or imagined) and
sense perception.

Essentially, this means that each of us experiences
the world through a unique nervous system. No-ONE
shares the same experience, memory or perception so we
each have our own metaphor, a unique and individual
‘Reality-Tunnel’ through which we interact with the world.
Every conflict that has ever arisen or existed arose and
existed because of a conflict between different ‘Reality-
Tunnels’ and in the quantum matrix of experience there are
no points of mutual contact between two polarised ways of
interactively processing the world. Let me give you some
examples.

An atheist and a devout Catholic will never agree on the
existence of God because they each inhabit a completely
different and mutually exclusive Reality-Tunnel. The atheist
will never understand how anyone can believe in A God
while the Catholic cannot believe that anyone could not.

Fortunately the existence of A God is easily proved. This is
not dogma; it is open to empirical testing by Scientific
Method. The foundation of scientific method is hypothesis
testing in an attempt to prove the null hypothesis to be true
which, if the null hypothesis can be rejected by
experimentally valid data, results in theory which is, in turn,
tested by reliable replication. So, let me replicate a valid
hypothesis tested in public by the American critic (and
comedian) George Carlin.

If there is A God, may he strike dead everyone in the
audience here this evening. (Pause) Is everyone OK? Not
even a little ache, itchy balls or headache? No. OK, this
may not be empirically valid; you may not want to be struck
down so let’s tighten the parameters of the experiment
using myself. I am a Diskordian so frankly I don’t give a shit
if I’m struck down or not. So, here we go: If there is A God,
may he strike me down dead here and now. (Pause). See?
No? Mmmm … maybe a slight twitch, no it’s fine. OK.

Our Diskordian purpose is to realise, test and then to
expand your own Reality-Tunnel. And we can do this every
minute of every day by comparing the different Reality-
Tunnels, for example, of men and women.

Men and women exist in totally different Reality-Tunnels.
Women exist in a Reality-Tunnel which leads them to think
that we, men, have good memories and psychic abilities.
Test it. Guys, think of the time you got home and as soon
as you open the door you got the feeling that you’ve just
stepped into an industrial deep-freeze unit. We’ve all been
there. You know it. You’re girlfriend, partner, wife has that
cold, unemotional, expressionless stare that tells you there
is going to be no honking on Mr. Bobo tonight . . . but we
don’t know WHY? Yup, something is wrong but what? Our
mind goes into survival overdrive and we start to rack our
brains: “Have I done something I shouldn’t have?” “Or,
maybe worse, haven’t I done something I should have?”
Maybe! But I don’t know WHAT? So we let it ride for a
while and then eventually pluck up the courage to ask
THAT question, TIMIDLY – ‘Is there something wrong,
sweetheart?’ And we just know what the answer is going to
be, it’s always the same . . . a very curt and emphatic “No!
Should there be?” So eventually we find out . . . Women
live in a Reality-Tunnel where they can remember events
in time with NUCLEAR accuracy . . . “You SHOULD know .
. . It’s 3 years, 5 months, 2 weeks, 6 days, 14 hours, 33
minutes and 22 seconds since we met. It’s our
ANNIVERSARY!”

OK it’s true men have good memories, as good as women,
but it’s evolved for different purposes. Most men can
remember every World Cup Final winner of the last 50
years but our brain is not designed to remember birthdays
and anniversaries – it’s just not a part of our nervous
hardware or mental software. It just doesn’t work in that
way, it wasn’t designed to! So, girls it’s not that we men are
not romantic and we will bring you flowers and chocolates
and give you a night of unforgettable passion but you have
to play fair and give us advance notice; “Don’t forget it’s
our anniversary 20:30:22 next Wednesday evening”.

I actually think that much of the female Reality-Tunnel is
developed at school in secret classes that us boys do not
even know exist. Girls are taught vital skills and strategies
for female survival in later life. Things like how to wrap a
towel the size of France around them and secure it in such
a way that a Sumo wrestler could not remove it. Have you
tried it? I have. Fucking impossible! More than that I’ve
tried to do the same, big towel, wrap it around try to fix it. It
just falls off. Secret classes, bedroom to bathroom, men
and women, different Reality-Tunnels!
.

Another thing they learn is how to do that medium-sized-
towel-around-the-head-looking-like-the-Queen-of-Sheba-
thing. HOW do they do THAT? I’ve tried that too. Just
comes loose and flops over my face like a nappy on an
over-fed baby that just filled its nappy. Secret classes,
bedroom to bathroom, men and women, different Reality-
Tunnels!

Secret classes: they learn the location of the secret shop
where they can buy towels the size of France, how to wrap
them, how to do their hair in three seconds, how to put a
bra on from the front . . . I can’t even undo the things with
two sound hands in broad daylight from the back! I usually
end up with my knee in the middle of her back pulling the
fucking thing in every bloody direction – up, down left right,
backwards, forwards every fucking which way. It’s like
unfolding a deckchair on the beach, swearing blue murder
and ending up with three broken fingers. Secret classes,
bedroom to bathroom, men and women, different Reality
Tunnels!

I remember that many years ago I had a brief but very
satisfying relationship which demonstrates this whole thing
about men and women, bedroom to bathroom, different
Reality-Tunnels. I would occasionally spend the night at
her place but one evening we went out for a few drinks and
I hadn’t planned to stay but that’s what happened. We had
a good meal, got a little drunk, got a bit stoned on a couple
of good joint and spent most of the night engaged in sexual
gymnastics. Yes, I know, difficult to believe it now but I was
a lot younger then and what I used to do all night it now
takes me all night to do. Anyway, I stayed the night and the
next morning my mouth felt like a tramp’s pants and I
wanted to brush my teeth but, having had no plans to stay,
I hadn’t brought my toothbrush so, innocently, I asked if I
could use hers. To my amazement the reply was an
emphatic No. “Ugh! No! It’s unhygienic!” Unhygienic? This
is the same girl who spent most of the night with my cock
half way down her throat! But sharing a toothbrush,
unhygienic!

Men and women, bedroom to bathroom, different Reality-
Tunnels! OK I think my time is up. Remember you are all
Popes in the Diskordian Church of the SubGenius of Uncle
"Bob" and you are all infallible. Test your own Reality-Tunnel
and expand it with Independence of Thought and Freedom
of Action: Your Future exists first in your Imagination, then
in your Will and then becomes your own Reality. Go
forward and create your own Diskordian future.