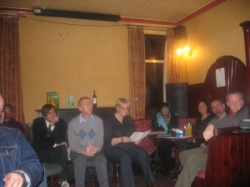 The Howcroft with its authentic drab curtains and mustard coloured walls creates an impression of a well worn but tired looking establishment. One way to instil the pizzazz and razzmatazz of yesteryear would be to fill its rooms to their maximum capacity with sounds of mirth, merriment and clinking glasses. Another way would be to scatter a room with poetic utterances set amongst a receptive yet subjective audience. Hidden amongst these words and phrases would be the men and women who between them could claim to be heavily involved in the shirking of work and responsibilities. In their absence, how about having a Sunday night at The Howcroft poetry fest and call it Write Out Loud? There, that sounds better.

So, Sunday night at WoL brought with it a mix of the finest poetic ingredients this side of the bar and with it, some excellent poetry was baked on gas mark 3. The runners and riders, or should that be the runner beans and riders, Mr Gordon Zola? Were an international blend of urban street poets, seasoned performers and the young, yet shockingly experienced, alike.

John Armstrong was in charge and it would take the strong arm of the poetic law to beat this lot into an unrecognizable submission. Usually a man of few but highly relevant words John handled the evening, and its occupants, with a calm and methodical style perhaps the perfect antidote for any potential unruliness that does, on occasion, develop at certain tables!

Stevie Turner’s fashion sense is thirty years ahead of mine and so too perhaps the majority of people who I know -including the women. His fashion style demands that you listen to what he has to say and he returns this compliment of effective listening with his complex and intricate poetry that bites at your aural receptors. If this sounds too painful an experience for some, then take the time to read his poetry and take the weight from off your soul.

Young Melanie brought with her a removals van filled with emotion and performed ‘Furniture’. This multilayered piece is clever and promotes subtle squints of reflective thought. And she was wearing a lovely little hat too!

Eric read a wonderful poem that maintained the theme of St Valentine for another week with his rhyming couplet festival of words and unique, witty observations.

James Hartnell and Don performed with an enthusiasm usually reserved for large sporting events and James’ nimble fret playing fingers produced a sound as good a compliment to Don’s poetry as I’d seen and heard this week. Even the collapse of the giant Jenga tree* being constructed, although somewhat clumsily in an adjoining room, did little to temper their performance.

Paul Blackburn lived up to the pre billing hype when he performed what sounded like a brand new - fresh out of the box - poem that shone a welcome light onto the relationship of himself, Julian, and Dave Morgan. Finishing with the lines “we haven’t got a penis between us” could, taken out of context, destroy lesser men. However, lesser men they are not and with words like ‘penis’ resonating around the room, this did wonders to lift the lid on the tin of melancholy that threatened to quell a group's high spirits.

Julia is, as they say, a 'new one on me'. I hadn't under any circumstances seen her perform and last night was a first. Not only because I'd maintained a level of sobriety but because I listened to her for the first time. However, i was distracted by a vibrating buttock (as perhaps we all would) and i had to take an urgent telephone call. But i did notice that she had a confident and assured style, developed over what must be years of writing, such is the standard of her work.

Gordon Zola is often food for thought. This week was no exception as he teased us with a poem that had a semantic cornfield of words that were, in some cases, loosely associated with the theme 'food'. Between the groans and the cheers, he never fails to amaze the audience with his ability to not only remember his lines but maintain a straight face, especially after words such as 'appeased'. Fan-tastic Mr Zola

Bill, usually associated with Don Parry and a guitar decided to unfetter himself from any musical accompaniment and read a short but profound piece. Bill's introduction was longer than his poem, so none of us would have felt short changed I'm sure.

Dave Morgan finds himself at many a Write Out Loud evening and its poetry. The coincidence that they are held on licensed premises is a simple coincidence that i too find heartening. Dave's writing is solid and has more layers than my grandparents' had bedsheets. His style is both sincere and from the heart, and for that any man should be championed as a performance poet.

Keith 'the nourishment poet' satisfied his quest for nourishment and our thirst for original and thought shuffling words. Val Cook recited, neigh, performed her poetry in her usual assured and confident style. But I have to be careful what I say because Val reminds me of my Auntie Joan. She began to take us around the pyramids and promised that she would finish in the second half. However, Val had a change of heart and at this point I had to change my empty glass and empty the contents of my peanut sized bladder. Ooh, and have a cigarette.

But I did manage to see and hear Tony - International Artiste - Walsh. His poetry, can, on occasions, put too much stress on both his teeth and his alveolar ridge. Such is the ferocity of his alliteration and subtle nuances between his rhyming schemes, the high accolades that sit on his broad shoulders sit there with good and fine reason. If any man dare challenge Tony to a game of ‘fastest tongue’ I know where my money would go. In my experience following a man with a tongue that fast can only end in disaster. Speaking of which. I read my stuff and for a moment I felt that I was standing inside my Nan’s drawing room. Such is the intimacy and ambience of The Howcroft. All those eyes. All those ears. All that hair. Just an ocean of poetic peers with their occasional waves of heckles. Followed quickly of course by ripples and bursts of encouragement along the way.

There were others performing too. But for a man with my ailment I’m afraid I missed them. Except of course Pete Crompton’s first half performance. I recorded it, much to his disapproval, and will perhaps post it soon. In the meantime, those who missed the boat will be able to catch up soon with the good ship 'Write Out Loud' and its crew of wordsmiths and poets when it next anchors in your local town.

* I kid you not. Over sized large Jenga puzzles for indoor and outdoor use. Brilliant, but still not as good as drinking...

Darren Thomas is currently a mature student at the University of Manchester reading English Language. He was recently a showcase guest at The Octagon Theatre in Bolton and has been published in various magazines and newspapers and was recently featured in The Bolton News.

An absoluteuly cracking review, Darren. Nourishment for the soul of Write Out Loud. Your sardonic asides slip down as smoothly as a sardine sarnie, yet do so with affection, erudition without affectation.
Your phonetic references, and your phone's tic reference, were consonant with a man of such erudition. Nice one.