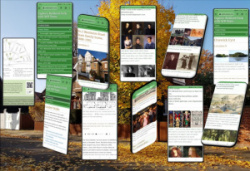 TV and radio presenter Jeremy Vine has launched a smartphone trail of eight poetry places associated with WB Yeats in the west London suburb of Bedford Park, Chiswick. 'Discover Bedford Park with WB Yeats' is a guided, web-based walk for anyone with a smartphone or tablet, and narrated by actor Ciarán Hinds.

This year marks the centenary of Yeats winning the Nobel prize, and the smartphone trial follows on from last year’s unveiling of Conrad Shawcross's #EnwroughtLight artwork celebrating the Irish poet, who spent some of his early years in London. The title of the artwork comes from lines from the poem ‘He Wishes for the Cloths of Heaven’. The poem was partly inspired by the poet’s unrequited love for Maud Gonne who he first met in Bedford Park. The smartphone launch will take place outside St Michael & All Angels church, opposite Turnham Green tube station. More details