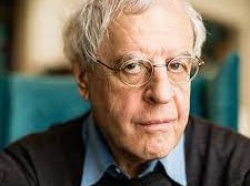 A Serbian-born American poet who as a child survived second world war bombings of his city of Belgrade has died at the age of 84. In his early childhood in the former Yugoslavia Charles Simic and his family were forced to evacuate their home several times to escape indiscriminate bombing. Growing up as a child in war-torn Europe shaped much of his world view, Simic said, adding: “My travel agents were Hitler and Stalin.”

He emigrated to the US at the age of 16 with his brother and mother in order to join his father in 1954, and grew up in Chicago. In 1961 he was drafted into the US army, and in 1966 he earned a BA from New York University while working at night to cover his tuition costs. His poems won a number of awards including the 1990 Pulitzer prize, the Griffin International poetry prize, and the Wallace Stevens award. He was also appointed US poet laureate.

According to the Poetry Foundation, Simic’s poetic output “defies easy categorisation. Some poems reflect a surreal, metaphysical bent and others offer grimly realistic portraits of violence and despair.”

How much death works,

No one knows what a long

Day he puts in. The little

Pinochle in the backyard

Or just sitting on the steps

Meanwhile, in a strange

Part of town looking for

Someone with a bad cough,

But the address is somehow wrong,

Even death can’t figure it out

Among all the locked doors ...

And the rain beginning to fall.

Death with not even a newspaper

To cover his head, not even

A dime to call the one pining away,

On death’s side of the bed.

◄ Sorry for the 'security warning' ... we hope all is now back to normal