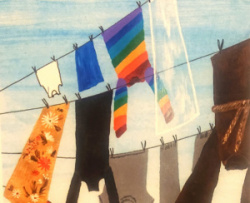 There is much to admire and enjoy in Workwear. Carla Scarano D’Antonio’s clarity of vision, disarming directness and artist’s eye for detail take us on a journey in which portraiture, domesticity and the melding of her Italian heritage and life in contemporary Britain combine to create a rewarding and occasionally unsettling experience for the reader.

‘Palisade’, which opens the first section of the book, titled ‘Work Clothes’, sets the tenor for the collection. Taken from Alice Maher’s self-portrait of the same name, it speaks of protection, a palisade of twigs around the face where “cut ends” dig into skin “keeping me safe”. The juxtaposition of ‘cut’ and ‘safe’ establishes a contradiction which demands a re-evaluation of how we seek sanctuary in a threatening world and the personal cost of recognising the challenge.

‘Helmets’ and ‘Collage of museum pieces’ demonstrate D’Antonio’s ability to deploy the visceral. ‘Helmets’ considers a swathe of history in which 650 BC Corinthian armour with its “mute one piece skull” mutates into contemporary “Kevlar fibres and thermoset resins”. Set as reportage this poem asks the reader to consider the utility and futility of such workwear - the evolution of protection which concludes with a helmet that “reduces traumatic brain injuries and blast impact”. ‘Collage of museum pieces’ bristles with spears, nails, metal barbs, “an arrow/pure and polished/ ready to hit”.  The poet then shifts the perspective from the hideous, a teapot where blood drips the spout, to floral patterns: a plate and a cup and saucer where the colours of spring and bright patterns lead us to the concluding word “life”. And there we have it: a deft shift to the domestic, a concurrence of two distinct and interwoven worlds.

While images of armour, weaponry and war offer a critique of masculine aggression, section one also includes poems that offer strength clothed in vulnerability. D’Antonio wears a necklace, a family heirloom passed down from her father; cupids “rub against the skin” but “don’t hurt, leave no marks”. A poem in which she imagines dressing for death has her wearing Murano beads and rainbow colours. Danger is there but the subject is defiant and prepared as the poem concludes with a startling and ambiguous image: “the smell of dirt from melting snow” – the soil of the grave or the soil of life. ‘Saint Francis of Assisi’, written in response to a Cimabue fresco, is a list poem which, through the repetition of ‘no’, strips away fashion (wittily combining historical and contemporary dress) and vanity to suggest that faith can clothe us; we move from the physical to the metaphysical as the saint, secure in nature, prays as he rests his head on stone.  And so the section concludes with ‘A new me’, a transformational and celebratory poem where colours match the seasons and the poet is reborn.

In section two, D’Antonio’s disarmingly direct style is very much to the fore. Her early life in Rome, her grandmothers and parents, motherhood and the lives of her own children provide the subject matter for poems both tender and tough: a father whose temper “pierced (her) guts”, in ‘Space to play’; she and her sister play with dolls, try to feed “their sealed mouths”; marble bedside tables have edges “sharp as knives” and the marble floor has “grey veins meandering like snakes”. ‘My way of cooking pasta’ becomes a recipe for rebellion, breaking the rules and independence. We move from the heat of Rome, Ferragosto and the Trevi fountain to the poem ‘Newcastle’ and a touching farewell to a growing son. This section richly rewards a reading in one, and its penultimate poem ‘Valentina’ about her adopted autistic daughter, hits you in the heart. Frank and unsentimental, this poem is a highlight of the collection and its conclusion “I will miss her/ I will stay with her” is perfectly pitched.

Sections three and four, ‘Stars and Flags’ and ‘Masking Faces’, focus on imagistic descriptions of place and nature, a clue to process given in ‘Ways of looking at walls’, which opens with a quotation from documentary photographer Varda Carmeli. ‘Impressions of Calgary’ is a snapshot view contrasting the urban and natural landscapes of Canada. ‘Umbrella’ begins as a landscape painting and becomes a lament for victims of war and refugees. ‘The hare’ is one of the most intriguing poems of section three, where the poet imagines riding on the back of a hare, beginning with trepidation, “If I could face the speed”, and concluding with “on the back of a hare/only one can risk the journey”.

‘Masking faces’ contains a sequence of lockdown poems, opening with ‘Spanish flu’, a precursor to Covid, then moving on to celebrations of liberation as the pandemic weakens its grip, though D’Antonio moderates her joy of freedom with warnings: ‘Moonshine stream’ speaks of “dissonant tunes” and “unrecorded sorrows” before it looks towards “speckles of dawn,/ flashes of tomorrow”. ‘The lesser loss’, which makes an appeal for awareness, our existence in a sensate universe, offers a summation of the collection. The repetition of ‘Give me’, an incantation of colour, taste and texture, concludes with “Give me crushed rubies/take me by surprise/ remind me I’m still tangible”. This is a collection that rewards re-reading; read it as a whole if you can and accompany the poet on a personal journey enriched by painterly detail and an acute sensitivity to the world around her.

Ron Scowcroft lives in Lancashire. Winner of the McLellan prize and the Frogmore poetry competition, his work appears regularly in anthologies, magazines and on literary websites. His pamphlet Moon Garden was published by Wayleave Press in 2014 and his collection Second Glance was published by Oversteps Books in 2022. He obtained his MA in 20th century literature and cultural change at Lancaster University in 1982 and was awarded a PhD for his research on JG Ballard and visual art several years later