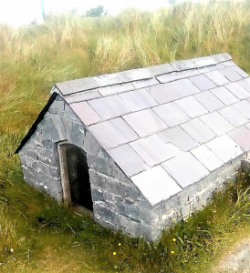 As a young man I visited Galway on the island of Ireland,
with its massive bay, so famed in song, and set off on a trip
to visit those remote Aran Islands under the tutelage of our guide, a comedian called Tommy.

He boasted that he would just shut his eyes and ‘hope for the best’,
while driving a coach which seemed to hover on the edge of a great precipice.

We all laughed, except some American ladies who, with their transatlantic humour,
or maybe lack of it, didn’t get the joke, covering their eyes with their hands.

We sailed to the island of Inishman, with hardly a breeze to worry our passage,
but Madge, an actress from New York, seeing I was trapped to starboard by Mary Lou,
a notorious bore, kindly rescued me, but alas,
only at the cost a long diatribe about an old flame, Miles Manlycamp,
whom she’d met while playing in The Playgirl Of The Western Swirl,
a controversial take on JM Synge’s homage to male heroism, Playboy Of The Western World.

But walking along the shore of this tranquil island,
we suddenly stopped to gape at a little fellow climbing up a precipitous cliff,
which rose like a sentinel out of the sea,
The climber then disappeared inside a tiny mediaeval church, half-sunk beneath the sand.

‘You’re a fine-looking woman,’ commented the curious chap,
on emerging from the narrow confines of that holy place.
He went by the name of Micky Paddermunce,
and bore a marked resemblance to the comical driver, Tommy.
‘Thank you,’ she responded with a blush, ‘Are you connected with this building?’

‘God bless you, not at all, I’m looking for my teeth,
I slept in here last night after drinking too much stout.’

Then he looked at her with a penetrating gaze, ‘I’m blessed with the gift of foresight,
and predict you’ll have a sparkling career as a novelist.’
Then he wandered off, singing a ballad in Gaelic.
Madge wondered what this meant, and vowed to take up her pen.

Returning to New York she starred in the play, Funny Girls Have More Fun,
wearing a glittering dress, to became a much vaunted star on Broadway,
an object of admiration for gay men,
as the madame of a house of ill repute, singing ‘My best friend’s a ponce,’
which ‘opened the curtains on a hidden world of perversion!’
according to Glen Beachamp, the city's celebrated critic.

Her old actor friend Miles remarked,
‘Maybe you misheard the old chap in Ireland, for they do talk peculiar.
I appeared there in my camp version of The Quare Fellow,
that play by Brendan Behan, Dublin’s famous rebel.’
Picking up the magazine, Literally Literature, she read a review of her debut novel,
Guardian Of A Holy Relic, inspired by her time in beautiful Erin.
The headline declared, ‘By gum! Toothless islander spawns historical tale’.

However, her contentment was soon dampened by rival publication,
Power Of The Pen, who lambasted Madge’s status as a ‘serious’ writer,
in a scathing editorial, ‘A woman who shocked the public by playing a fetishist!’

‘Ah!’ she exclaimed, ‘that’s what the old chap meant that day on Inishman.

‘When he took his teeth out – I thought he said ‘novelist’!’