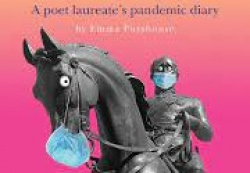 This book comes with a health warning. Wolverhampton’s legendary ‘man on the oss’, aka Prince Albert, is wearing a face mask and so is his horse. Both of them look alarmed. Perhaps they should be because, aside from the pandemic, Wolverhampton continues to attract (unjustly in my view) a bad press. The rot set in in 2009 when the Lonely Planet Guide poll ranked it as being the fifth worst city in the world. It has since won other dubious accolades such as ‘the UK’s most miserable city’ in 2015 and ‘the UK’s most promiscuous city’ in 2017. How this last finding came about is best left to the imagination.

All of this begs the question about what to do if you are appointed as the first poet laureate of such a city. This book describes how performance poet, novelist and mentor Emma Purshouse set about to rise to the challenge upon her appointment which was, as indicated in the title, an honorary one.

Conceived in the format of a diary interspersed with poems, the book yields interesting information about the background to the poems, the life of the poet herself and her busy writing and performance schedules. The extent of her reading engagements up and down the country will leave readers dizzy until the imposition of lockdown due to the Covid-19 pandemic. We then learn about Purshouse’s resourcefulness and inventiveness as gigs moved online and other forms of electronic communication helped her to continue to pursue her role as poet laureate, undeterred. The importance she places on keeping up with literary contacts to sustain commissions for future work and to explore fresh ways of creating poetry with the involvement of other writers or members of the public is admirable and has clearly paid off.

Responding to the broadsides launched against Wolverhampton, Purshouse comes up with ‘Wolverhampton – A winning city’, a poem full of Black Country humour where the residents of the town pretend to act the part they suspect the judges would like them to act in order to enable them to confirm their suspicions:

We trained our pigeons to limp.

And when the judges asked

if we were happy,

we answered, “We’m Wolves aye we?”

In ‘What’s great about this city?’ Purshouse takes us on a Cook’s Tour of the city’s landmarks, historical figures and past icons of industry: Bantock House, West Park, Chapel Ash, Lady Wulfruna, The Queen’s Ballroom, Goodyear’s factory and the Chubb lock works.

In response to a call for a poem from the pre-Raphaelite Society that had a connection to the city, Purshouse’s ‘Christina Responds Badly to Poetry Criticism’ is a timely reminder to all of us budding writers that even the well-established ones, in this case Christina Rossetti, receive rejections from time to time.

The woman in ‘Looking for “New Beginnings” and “Fresh Starts” in the Homebase Paint Aisle’ thinks big. Her colour schemes are way over the top, growing more and more adventurous with each line:

and Ariadne touched by Titian.

It is no small feat how she manages to contain so much abundance within the confines of a sonnet. A similar feeling of plenty is achieved in her seven stanza celebration of the ‘Boundary Way Plots’ outlining the dreams and aspirations of a multicultural community drawn together by a shared passion for growing their own vegetables.

Links to videos and audio sequences are included at the end of the book to enhance our enjoyment of these poems.