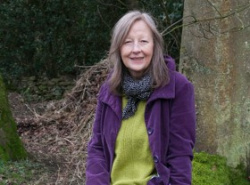 This year’s winner of the Laurel prize, Linda France, will be appearing at Durham book festival on 14 October to lead a session titled Yours Sincerely: Writing for the Climate.

Linda France was named winner of the £5,000 Laurel prize earlier this month for her collection The Knucklebone Floor (Smokestack), which is partly a verse biography of Susan Davidson (1796–1877), who spent 30 years landscaping and developing the grounds of Allen Banks in Northumberland. Second was Steve Ely for The European Eel (Longbarrow Press), and third was Jemma Borg for Wilder (Pavilion Books).

Later in the same evening at Durham Linda France will be launching her next collection, Startling, which gathers work during her three years as Climate Writer in Residence for New Writing North and Newcastle University. More details

When Seamus Heaney met the Queen: an appreciation of the Nobel prize-winning poet and his allegiance to people and places ►