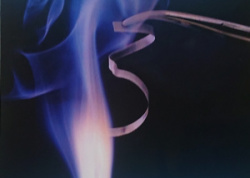 A poet should always be curious, alive to the world in all its aspects, and David Cooke certainly is. I have also always regarded him as a practical, no-nonsense poet; one of his interests is in how things work. The Metal Exchange, his ninth poetry collection, opens with a poem of gratitude to Pablo Neruda for leaving “a seam unworked for me”. Having delved through Neruda’s work, Cooke could not find a single one “in which you praise a metal, be it rare or workaday”. In this collection, in which he has produced a poetic encyclopedia of metals, stacked high with quotable lines, knowledgeable asides, and plenty of humour, too, Cooke seeks to put this matter right.

‘Brass’ seems to speak with a Yorkshire accent:

these have been the basis

you have built an empire on.

‘An ode on rare earths’ is keen to look at the positive aspects:

beef up our scans, showing us how far

their hybrid cars, may in the end redeem us

from our own excesses.

‘Gold’ “validates paper. / It’s what the rich cling to when the bubble / bursts”, while lead’s “poison leaching slowly / down conduits and veins. // Unremarked, it taints / the brain’s frail capillaries.” ‘Mercury’ “weeps elegant tears”, and ‘Tin’ is “too mundane to be respected, / your name has been abused / in tin-pot general, a tin god”. Cooke also touches on the short-lived, modish appeal of ‘Zinc’ in eateries and bars. His celebration of ‘Cogs’ is indicative of his way of looking at the world:

For too long unheeded, it’s time

to note their virtues: the way

they grip and take the strain;

Gearing up doggedly, with only

they are truly fit for purpose,

when there’s work to do.

He sees the funny side of ‘Scrap’, as he muses: “Who’d have imagined there’d be no takers / for the chattels it needed a lifetime / to gather”. Then he finds:

But leave an appliance out on the drive

that rusted away in a shed for years,

In the final stanza he invokes the ghost of the rag and bone man of long ago.

‘Barium’ is particularly curious, with Cooke evoking a movie from our childhoods, about an intrepid crew being miniaturised and being sent in a microscopic craft inserted into a patient’s veins, for security reasons, to carry out a crucial medical procedure, and meeting all sorts of internal body hazards and defences along the way. 1966’s Fantastic Voyage is the film I remember, with Raquel Welch and the villainous Donald Pleasance among its stars, watched during a school holiday in the local Odeon.

Sometimes Cooke encompasses far bigger, if not universal concepts, in his examinations of materials:

Nothing comes of nothing. Nothing can.

… So what’s the matter

and what is it that sets the world

and you spinning? If nothing’s

The ripples never reach the buffers.

Three of the poems in this collection, which I would rate as one of David Cooke’s best, also appear on his Profile page on Write Out Loud, where he has regularly placed his work over the years. He is also editor of the excellent quarterly online magazine The High Window, which includes poetry, reviews, essays and translations.

Many of these metals might be ignored by most poets, who don’t appreciate their worth as subject matter, or, in my case, aren’t even aware of them. This is a collection that celebrates the material world, and at the same time can be seen as a distillation of David Cooke’s originality and vision - and his willingness to look outwards, not inwards, for inspiration.