'Like sitting on top of the world': former family home of Ted Hughes up for sale 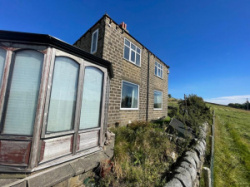 A house in Heptonstall, West Yorkshire, that once belonged to the family of Ted Hughes, and of which Sylvia Plath wrote in a letter to her mother, “Up here it is like sitting on top of the world'', is for sale.

It had great significance for Ted Hughes. According to the unathorised biography of Hughes by Jonathan Bate, it was here that he brought Sylvia after their wedding to meet his parents. And it “was from here that he took Sylvia – playing Heathcliff to her Cathy – on a day trip to Top Withens, the ruined farmhouse believed to be the original of Wuthering Heights. It was here that the family gathered on the day that Sylvia was buried, near the family plot, just down the road in Heptonstall graveyard.”

Hughes wrote about the house, and his relationship with Sylvia, in a poem called ‘The Beacon’ or ‘You Claw The Door’. Bate says: “The woman desperate to escape the house. Torrential Yorkshire rain crashes against the windowpanes. Inside the houses, on hillside and in valley, the lights of evening twinkle.” The poem includes these lines: “Lights / Over conversation and telly and dishes / In graves full of eternal silence.”

'Like dust their lives so small compared to ours' ►