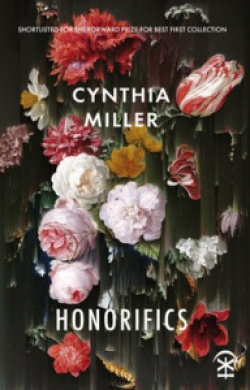 Born in Kuching, Cynthia Miller is a Malaysian-American poet, festival producer and innovation consultant living in Edinburgh. Her poems have been published widely both at home and abroad. Honorifics is her debut collection. It was shortlisted for the Forward prize for best first collection in 2021.

The book is centred on all the things Miller holds most dear and honours with her heart: her family, her ancestry and her home, wherever that home happens to be. Most of the poems were written during the first lockdown of summer 2020.

The format of Miller’s ‘Glitch Honorifics’, a poem as near to the title as possible, put me in mind of Raymond McDaniel’s ‘boxed poems’ in Special Powers and Abilities. Both McDaniel and Miller remind me of how we have a tendency to compartmentalise people on the basis of one or two random actions that have happened in the past. Miller’s texts are presented as the nearest thing to a three-dimensional poem that crosses the generations with each ‘box’ overlapping the other where the past fades into the background and the present looms large in clearer print.

There are many things to admire in this collection. The language is luxurious. Miller’s poems contain some memorable lines. In ‘Social Distancing’, which she refers to as ushering in “an epoch of transmutation”, she opens with the line that “Some evenings the neighbours turned into jaguars and dragged their dinner up into the trees.” Opulent vocabulary contained in poems such as ‘Feast Day’ – “mountains of / buttery pilaf; gunpowder potatoes; / Nalli Nihari lamb falling off the bone” - give us an indication of Miller’s powers of observation. Her playful inventiveness comes to the fore in poems such as ‘Eurydice video calls her lover in lockdown’, which opens:

we aren’t breaking any divine rules.

Look all you want. Everyone here

is on a long-distance call, speaking to someone

already slipping out of memory.

In the list poem ‘30 things Sarawakians know’ Miller allows herself free rein to range over many disparate things in a way that would not work in a more linear poem. In it, we can move quite logically from “plum salt with fresh cut fruit” to “the cooling properties of sleeping on bamboo mats”.  A similar technique is employed to good effect in ‘Yellow’ that is variously described as “the end of a purpling bruise” and “the centre of the world”. Her juxtapositions are playful and inventive. They keep us in suspense as we relish the surprise of the next line. Miller draws her metaphors from science, cookery and outer space, a range that is wide enough to keep the attention of her readers focused on her work.

The middle section of the book is titled ‘Bloom’, an intriguing poem divided into eight sections where the common denominator is a smack or smuck of jellyfish, the word ‘bloom’ being employed as a collective term when referring to the moment when a swarm of jellyfish suddenly appear together. Two of these poems refer to the moment in 1991 when NASA sent thousands of jellyfish polyps into outer space on the space shuttle Columbia to study how creatures grow in microgravity.

In ‘Sonnet with lighthouses’, which opens the final section of the book, Miller takes the definition of a sonnet to a new height, managing to squeeze in more than the accepted 14 lines by turning them into 14 short paragraphs about 14 lighthouses. Other notable poems in this section include a piece written in the form of an alphabetum, an ekphrastic poem on a Winslow Homer watercolour, and a wild set of improvisatory descriptors for lupins.

Miller’s poetry is intelligent, inventive, playful and accessible. This is a very fine debut collection.

'Home be this small silence you curl into anywhere you go' ►