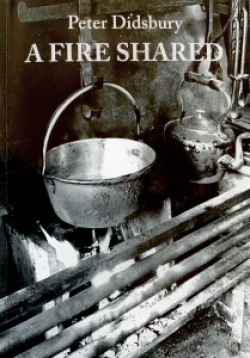 I came to know about this book through the ever-excellent series of close readings of poems that Carol Rumens posts for the Guardian. The poem by Didsbury she looked at was the eponymous ‘A Fire Shared’, about which she said: “Didsbury is a writer whose historical imagination and linguistic awareness illuminate a poetry of unusual reach and resonance." Well, that got me interested and so I bought a copy. Rumens went on to say that Didsbury is "often a poet of borders – between lyric and narrative, comedy and tragedy, fantastic and and realistic." Reading through the 38 poems in the collection, I couldn't agree more.

The first thing I noticed about the poems was how many of them concern themselves with daily domestic life. The viewpoint of many of the poems - 'The Fog', 'Stepping Outside', 'Language And Land' - is inside a house looking out into the garden, which then takes on mystical or fantastical overtones. In 'A Pasture For Gazelles', for instance, the narrator says,

The dog lies on the lawn, cracking open a peach stone I'm sure I

remember tossing onto that flower bed years ago, long before he

In 'Eleven a.m', the "end of the garden” stands in a "blue religious haze”. In 'The Evening Star', the narrator says: "Walking these gardens I have lately come to perceive / The firmament as something that observes me, / A scrutinising Face…" These domestic-pastoral poems are just lovely, raising as they do the everyday to the ecstatic.

The Surrealists placed a near-sacredness on everyday objects and, at times, Didsbury's work verges on the surreal. Not the Surrealism of Breton or Ernst, but the softer surrealism of Leonora Carrington or Leonor Fini. More whimsy, flights of fancy and zaniness than hardcore Surrealist. 'Yellow Shoes', for example, is a curtal sonnet about a journey into an Oz-like land, but many of the poems are infused with such Lewis Carroll-like logic. There is one poem in particular, the hilarious 'Tweedles', that explicitly references Lewis Carroll:

while Dum and Dee

in their lunatic pomp and gear

come jousting either side of the fence

before falling off their giddy-up broomstick chargers

and rolling around in the grass.

Then there is Didsbury's obvious love of balladry and social history. It comes as no surprise to learn that he is a highly experienced archaeologist. The wonderfully titled 'Braxy-Hams', for instance, tells the ballad of a "moorland lover” who wishes to win his love by giving her some braxy hams (defined in the Scottish Gallovidian Encyclopaedia as "the hams of those sheep which die of the braxy"). It is very whimsical. The equally weird and wonderful 'Bevis of Hampton' tells the story of a figure long lost in the mists of time who "sate upon a hill. / Beneath a tree, on a February day. / And all his food was a green goose, oh.” That "green goose" is just genius and the whole thing is very funny.

Indeed, there is the sense in Didsbury's world that the past, or the paranormal, is never far away. The poems are never surprised when ghosts and visitations make their appearance. The quality of living so long in other dreamy worlds brings with it an occasional amnesiac-like confusion of time and place. In 'Lines of Enquiry', the narrator is asked by a stranger what day of the week it is. His reply is, "I'm really surprised by his Dorset accent, / so it takes me a while, but Friday, / definitely Friday.” The book closes with just such a poem, 'Homeward Bound', in which the narrator says:

On this seemingly endless avenue

it depends upon how you align yourself

with regard to the trees

as to how much exhaustion you feel

But, for me, what is most impressive in Didsbury's work is his microscopic attention to detail in the natural world. Nowhere is this more evident than in the truly cosmic poem 'Words At Wharram Percy', which was originally published in the TLS and was once projected onto the Royal Festival Hall. In the poem, the narrator observes:

surface of the pond, and each touch rings

as if struck from a vanished bell.

through which a partridge

hurries her brood to safety

This poem wouldn't look out of place in Geoffrey Hill's Mercian Hymns with its telescopic look back through time to a wife who calls out "in Middle English, / to a man who mows in the glebe”. All of the natural world and its history falls into this magnificent poem. It is, perhaps, the finest poem in the book, a book which is elsewhere also packed with bright and beautiful things.