The Citizen and the making of City: Roy Fisher, Bloodaxe 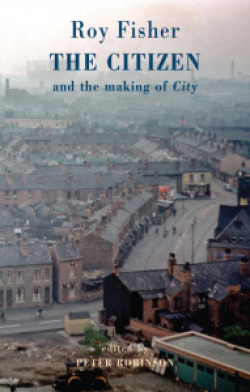 To many of his readers, the work of the late Roy Fisher will always be synonymous with Birmingham. The city consumed him and his fascination with it became a magnet for his writing. Reading his work made me think of Barry Tebb, a contemporary of Fisher, whose work will always be synonymous with Leeds. It would be interesting to know if they ever met. Both writers drew their inspiration from the cityscapes in which they lived, breathed, moved and worked. Both shunned the so-called establishment of the literary world, preferring to go their own way and yet both made their mark and gained a loyal following with Fisher, in particular, attracting the attention of a major publisher towards the end of his life.

This landmark publication, edited with an extended introduction by Peter Robinson, offers in a single volume the definitive 1969 text of Roy Fisher’s City, alongside two variant versions of it, its prose origins in The Citizen and its continuation in the form of ‘City II’ under the heading ‘Then Hallucinations’. It also includes a number of uncollected poems and is supplemented with an account of the author’s own comments and a bibliography of critical studies on his profound reflections to the changes that have taken place within England’s industrial city landscapes in the middle of the last century.

How much of The Citizen has survived is up for conjecture. There appear to have been at least 117 sections planned but only sections 1-36, 53-55, 61-66 and 69 are extant and even one or two of these are fragmentary. It is possible that the whole is therefore half the length of the projected original. The writing is vivid on two counts. Fisher’s descriptive powers come to fore when he writes about the industrial landscape of the city: pithead gears, dyeworks, railway sidings, goods yards, gasworks and factory districts that are deserted after five o’clock in the evening. You can almost smell the coal in the coal yards. His descriptions of people are also acutely observed. The scenes of isolated people drinking in cafes or public houses are particularly vivid. As a part-time jazz club musician Fisher was often going to work when other people would be coming home. He would be crossing town after midnight and if he didn’t sleep well, he would take aimless bus journeys at six in the morning and end up walking around remote suburbs where nobody knew him. He enjoyed this kind of anonymity. Looking down streets he had never been down before, he would glimpse an imagined world that would change his whole life.

The Citizen contains very little dialogue and no verbal exchanges take place between the narrator and the people he sees. The fact that he could not make his narrator speak became a source of frustration to Fisher and was one of the reasons why he finally abandoned the project.

The process of selecting and editing material from The Citizen for use in City is a complex one which was largely the result of collaboration with, and encouragement from, his contemporaries, in particular Gael Turnbull and Michael Shayer. His models for both texts were to a greater or lesser degree Eliot, Pound, Joyce, William Carlos Williams and Walter Allen.

In City Fisher deliberately moved away from the specifics of Birmingham maintaining that the city that he described could be any city, a kind of city of the mind. The persona of the narrator in The Citizen is largely expunged. As in The Citizen, Fisher is concerned to portray an accurate description of changing landscapes at a time in the late fifties and early sixties when great swathes of the old city were being demolished and replaced with modern buildings. There is no nostalgia here, just a dose of healthy realism. This is not a work in praise of his home town. Although the city held a certain fascination for him, there were times when he felt as if he were being possessed by it and so he viewed his work as being a way of exorcizing it from his mind.

In City there are more poems and much less prose. The poems were all generated as individual, stand-alone pieces, without any thought of them finally being incorporated into a larger body of work.

Peter Robinson’s thorough account of these texts offers us a unique insight into how a writer tackles the problem of crafting a credible structure, makes use of previously discarded material and collaborates with others to produce, over time, a work that is indelibly stamped with his own signature.

Roy Fisher, The Citizen and the making of City, Bloodaxe, £14.99

Yay! Robert Garnham takes his search for happiness to Edinburgh ►