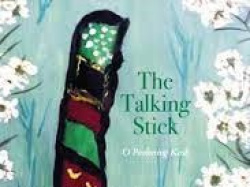 Sometimes a collection arrives where a reviewer’s task is not so much to seek out and analyse the way the poetry is crafted, but more importantly, to recognise the significance of the subject matter, and in this case the way a culture is being celebrated, recorded, and thus safeguarded.

At least, that’s the way I see it. The Talking Stick: O Pookering Kosh, as Raine Geoghegan says in her author’s note, was a blackthorn stick that was used in some Romany families as a way of passing on wisdom and knowledge from an elder to a small child. Geoghegan is aiming to pass on her knowledge in a similar way; this collection is her ‘talking stick’. It includes tales of characters such as John Ripley, who was apparently born literally under a gooseberry bush; and ‘great aunt tilda, a funny old malt’, who wore men’s clothes, spoke in a deep voice, never married, and was liable to end up “fightin’ and cursin’ ” with a relative she never much cared for in the pub.

There is a poignant poem about a couple on the threshold of love, on the eve of the second world war: “As the black of the night lifted and the moon sneaked through the clouds, we saw what was in front of us, we saw it clear as day.” (‘The Clearing’). In ‘a song to rest the tired dead’, an aunt efficiently but tenderly washes the body of her niece, before dressing her “in the finest of clothes”, while “the others won’t move too close /it is mokkadi [unclean] to do so”.

‘Apple Water country’ is the county of Herefordshire, where Geoghegan’s family picked hops and fruit. There are poems and stories about hop fields, strawberry picking, reading tea leaves, piercing ears, flower-selling, and playing the spoons, and the bones. There is relish for food cooked on the yog (fire) after a hard day in the fields.  It sounds like a tough life, but somehow idyllic.

It wasn’t, of course. There are also poems about being called names at school, and being moved on; and about what such attitudes can lead to. The final poem in the collection is ‘The Gypsy Camp at Auschwitz’. There is a separate memorial to ‘the Sinti and Roma of Europe murdered under National Socialism’, not far from the better known Holocaust memorial in Berlin.

Raine Geoghegan is of mixed heritage; English, Romany, Welsh and Irish. She has been a professional actor and dancer, before illness and disability brought her to writing. This poetry and prose collection is rich in stories, customs, lore, and above all, vitality. It is also rich with love.

◄ 'Sometimes I sit in the sun with them'