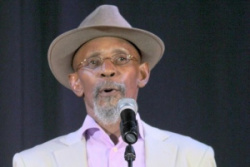 The veteran dub poet Linton Kwesi Johnson has talked about the language he uses in his poems, of being a “classic late developer”, and of joining the youth wing of the British Black panthers while still at school, in a long and wide-ranging interview to the Observer to coincide with the publication of his Selected Poems by Penguin.

“I was trying to find a bridge between standard English and spoken Jamaican,” he says, of his initial decision to express himself in the vernacular of the London-Jamaican community to which he belonged.

The Penguin volume divides Johnson’s verse into three chronological sections: the 70s, 80s and 90s. “The first decade was about urgency of expression, things I needed to get off my chest,” he said. “The second was all about learning my craft and how to structure my language, and the third was when I finally began to find my voice. I’m a classic late developer, so it took me 20 years to get there.”

Was it difficult to decide which poems made the final cut? “It basically came down to how embarrassing they were to read again. If they weren’t cringeworthy, they stood a chance … I’d say there are maybe five or six good poems in there and the rest I can live with.”

Johnson came to poetry, he writes in his afterword, “from the backwoods of literary ignorance”. Born in the rural small town of Chapelton in Jamaica, he travelled with his father to London in 1963, aged 11, his mother having made the journey before them. “I come from Jamaican peasantry,” he said. “My family were subsistence farmers, so basically we ate what we grew. Once in a while, we might have a few extra eggs to take to market, or some sugarcane or ginger. That’s how we lived.”

He joined the youth wing of the British Black Panthers when he was still at school. “You had to take part in demonstrations, sell the newspapers and study certain texts. We read Soul on Ice by Eldridge Cleaver and Seize the Time by Bobby Seale, but also Capitalism and Slavery by Eric Williams and The Making of the English Working Class by EP Thompson. For us, class was important as well as race in the struggle.”

He went on to study sociology at Goldsmiths. In his afterword to Selected Poems, he writes: “Poetry for me was never a calling. It was more like a visceral need for self-expression at a formative period of my life, when I was trying to find my way in the world.”

His poems first appeared in the journal Race Today. They were written, he said, “out of the deep sense of alienation and rejection” that his post-Windrush generation experienced in Britain. “In Jamaica, we were schooled to be British, to wave the flag when the Queen came, but when we came here we were othered by the rest of British society. That kind of estrangement was profound and it is one reason why reggae was so important to us. It gave us a sense of independent identity that was all our own.”

The dub poetry that Johnson created drew on diverse sources, including the work of groundbreaking black American poets of the 1950s and 1960s. His arrival on the British music scene coincided with the birth of post-punk. He toured with Ian Dury and the Blockheads, and with Siouxsie and the Banshees.

He has been offered national honours, which he refused. He did not vote in general elections until Jeremy Corbyn first ran in 2017: “His manifesto presented me with a genuine choice for the first time.” What did he think of black politicians such as Kemi Badenoch who recently unsuccessfully in the contest to become Tory party leader. “These people are not representative of the black population. They are part of the black elite and their sense of solidarity is with the rich. They do not have any sense of solidarity with black people.”

You can read the full Observer interview here

◄ ... and while you're in Edinburgh, check out Shaun Fallows at the PBH Free Fringe