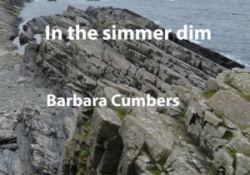 I’ve always wanted to go to Shetland. Geologist Barbara Cumbers spent a month’s residency there in 2017, and has visited the islands on several other occasions. Reading her pamphlet In the summer dim (Dempsey & Windle) has only increased my desire to travel there one day.

There is so much light, the midnight sky

Is full of it. Not stars nor moon – just light,

the simmer dim enough to read by

I am drinking light and space.

But she is aware that the “price of summer light is ice, / … and the deep winter dark.”

There is a marvellously evocative poem about the Northern Lights:

Because the night is shining green

So I wait in the still and the cold

for the solar wind

to blow the sky apart

For Cumbers, the Shetlands have the magic of a children’s story. And not just any children’s story. As her notes point out, Robert Louis Stevenson visited Unst in 1869, ten years after his father and uncle had built Muckle Flugga lighthouse off the island’s northern coast. Stevenson published his classic yarn Treasure Island in 1883, and included a map that bears a superficial resemblance to Unst. She says:

He could put the treasure

anywhere – it was already here

in the peat of the island,

its crofts and chromium

all the contorted rock of it.

This passing reference to the poetry of geology – the poet’s passion – is fleshed out in ‘An eccentric geologist describes the ophiolite fragment that form the eastern side of Unst and Fetlar’ (a title long enough to surely make it a poetry competition contender). She lovingly describes what she calls “snake-rock” as “too old to remember the ocean floor/  …  has secrets locked away, written in water // it holds as part of itself.”

‘Directions’ describes a loss of bearings on Shetland – “not north or south    south/ is safe   and north // is nowhere” – while ‘Burning’ conjures up a vision of Shetland’s annual fire festival held in January, when a full-size replica Viking longship is set alight, to commemorate the islanders’ heritage. The poet sees a fishing boat leaving at sunset, and imagines it is heading “to meet Viking gods of ice and fire”.

A no-nonsense pantoum about a ‘Last day’ encounter:

An otter surfaced near me quite by chance.

I needed a piss and crouched beside a wall

sheltered from the wind. A lucky glance –

a whiskered face emerging from a pool.

emphasises the poet’s other passion, for the wildlife on Shetland. There are mentions of ponies, of course, but also orcas, seals, geese, gulls, storm petrels, ducks, ravens, gannets, puffins, and bonxies, also known as great skuas, as well as botanical finds, “plants that live only here”.

I have also loved the TV series Shetland not particularly for its plots – what a crime-ridden place! - but for its scenery. Shetland could be described as bleak – “no trees, no mountains” – but that simplicity is somehow wonderful. Cumbers explores and celebrates the topography in poems such as ‘Island voices’, ‘Hermaness’, ‘Grind o da Navir’, 'A landscape for Sue’,  and ‘Bridges’, the latter about how oil money has made a difference.

This slim collection is a picnic of delights. In the simmer dim contains riches; poems to treasure, that take you there.