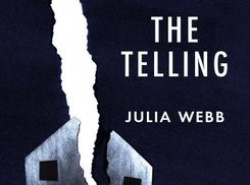 In Julia Webb’s third poetry collection she examines the complexities of familial relationships, between children and parents and vice versa, and others we closely co-exist with as lovers. It’s a telling collection, which renders its title all the more powerful and the poems herein are as much concerned with what isn’t said, than with what is revealed.

In the opening poem, ‘Crash site’, Webb employs the metaphor of a downed airplane to articulate grief. It’s an effective and poignant start to the collection, favouring a slant treatment of her subject matter that immediately exemplifies the often startling originality of her work. The crash site in question is grief itself, where “each survivor tells a different story”. Here Webb reveals a universal truth about the death of someone close; how it’s experienced in myriad ways by those who grieve. In the final stanza the metaphor comes into its own, with a unique and fresh take on how we live through the death of a loved one, and sometimes process the whole experience retrospectively:

Our first memory was the screaming of metal

and the silence which came after.

The poet is arguably suggesting that as we grieve we’re almost born again, which is a complex and compelling way to creatively examine our relationship with grief.

The Telling also delves into the universal drama of relationships with siblings. In ‘Your sister is blaming you for the rain’, the title alone hints that the absurdities of relationships with our brothers and sisters are about to be examined. And it’s very funny too. The sister resorts to absurd ways of communication to let the ‘you’ of the poem know she’s in the doghouse. Given the context of the poetry collection, it’s not much of a stretch for the reader to reach the conclusion this is about their parents, or specifically losing one, as much as it is about their own relationship.

Your sister sends a note by carrier pigeon

the note says it’s for your own good...

In the final stanza, another universal truth emerges, albeit a truth universal within the confines of being a poet. A reconciliation might even be on the cards when the poet’s sister turns up at a poetry reading. After all, she’s come a long way. The poet has a choice now. She either sticks to the safe poems in her set-list or reveals her frustrations towards her sister via poetry. It’s left for the reader to ponder which way it might go:

The big decision now, you decide,

is whether to stick to your planned reading

or break out the sister poems.

Of course, as many poets will tell you, we deal with lots of familial demons in our poems and choose whether or not to share them with our families. In ‘Birding’, Webb examines both the limitations and the small joys of relationships with lovers, from moments of affection and pet names to moments of real intimacy. But there’s always a sense that the ‘he’ of the poem is telling the poet what she wants to hear, and that the poet is all too aware of it. There’s a delicious resignation, apathy, even melancholy at play, as Webb goes about her business with her unsettling wry humour.

Jenny Wren he calls you on a good day,

on a bad day it might be Dame Drab

his fingers tangling in your nest of hair,

it’s then you offer him your song throat,

and on a good day he can make you sing.

‘Giving thanks’ deals with the tensions between mother and son in these strange days we live in. We immediately empathise with a young man “in this year where everything is going wrong”. The poet lays her own limitations bare, while trying to say the right thing and mocks her own “platitudes” as she tries to make her son see what he has going for him. But again, the poem ends on a surprisingly upbeat note. It’s a lovely little victory here for the parent, who witnesses how a little parental encouragement can go a long way:

but suddenly he is pointing out a goofy pigeon

and smiling, talking about the future

as if he seems himself in it …

The final frame of the poem is a delight as we see a mother feeling the joyous reward of simply getting through to her son: "and my heart flips / onto its back like an ecstatic dog."

The Telling tells it like it is, but slant. It lays bare our behaviours and limitations as we negotiate our ways through life and try to get along, in the various ways we co-exist within the often disorientating constraints we call family. It’s about our losses and little victories. It’s often heartbreaking, and frequently funny. It tells us what we need to hear and occasionally what we don’t want to hear. And Webb has that delicious ability to make you wince and chuckle at the wrong time, even through the darkest moments. The Telling is a triumph. Get yourselves told.